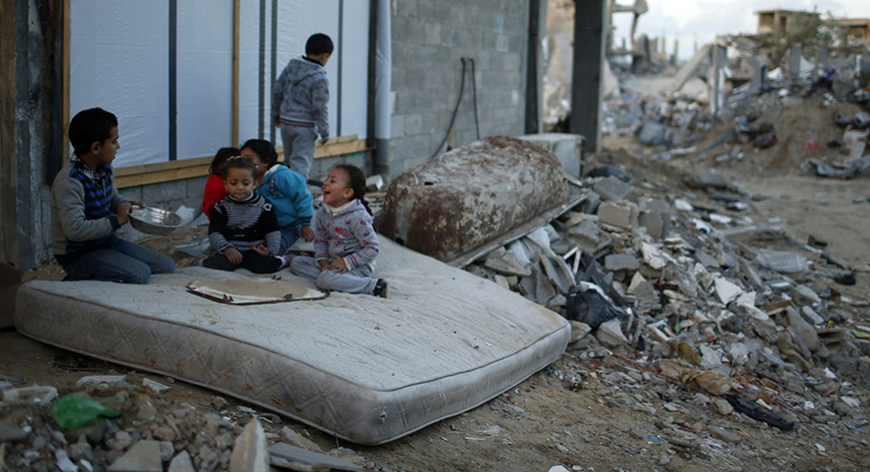 Palestinian children play on a mattress near the ruins of houses destroyed by Israeli shelling in the east of Gaza City, Dec. 1, 2014. Photo credit: Reuters

The UN Assistant Secretary-General for Humanitarian Affairs and Deputy Emergency Relief Coordinator, Ursula Mueller, called on the international community to strengthen continued commitment and sustained funding to help assuage the crises faced by Palestinians in Gaza and the West Bank, including East Jerusalem.

Mueller’s remarks came following a six-day visit to Israel and the occupied Palestinian territory (oPt), during which he expressed deep concern over the deteriorating situation endured by the Palestinian people.

“My visit leaves me concerned,” Mueller declared. “The challenges here are immense, but recent positive steps, along with the extraordinary people I met, give me hope that there are opportunities for improvement. We must seize them.”

The Assistant Secretary-General was a key note speaker at the sixth international conference on preparedness and response to emergencies and disasters, held in Tel Aviv. She met with Israeli and Palestinian authorities to better understand the challenges of the crisis.

The UN official reaffirmed the UN’s commitment to address humanitarian needs across the oPt, and advocate for longer-term solutions, including lifting of the blockade in Gaza and a fair planning and zoning regime, and more conducive living conditions in the West Bank.

She also visited the central West Bank, including East Jerusalem, where she met with vulnerable communities who are exposed to a coercive environment that reduces their access to shelter, basic services and natural resources, placing them at risk of forcible transfer.

In Gaza, she visited a major hospital, vulnerable women and men benefitting from the support of a women’s center and youth leaders, learning more about the deprivations of life under blockade and the negative impact of the Palestinian political divide.

“Until there is a viable political solution, it is critical that the international community continues to render support in a consistent and sustained manner to meet the needs of the most vulnerable Palestinians,” Mueller said. “Member States must continue to support humanitarian assistance in Gaza and the West Bank. At the same time, they must work to rekindle a robust political dialogue and promote long-term solutions, to address the root causes of this crisis.”