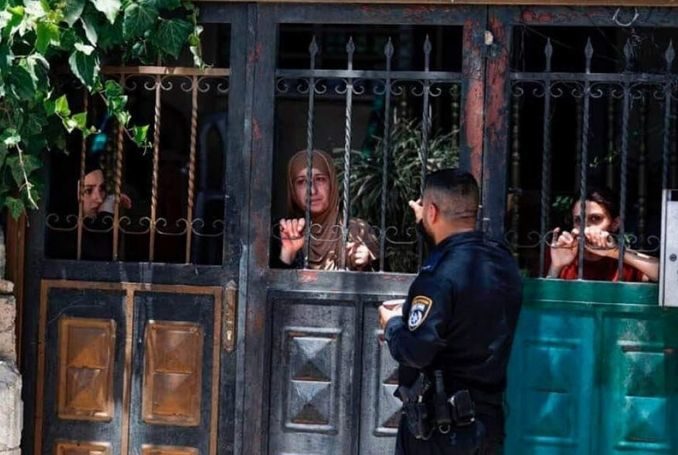 In recent decades, Israeli settler organizations, with the support of the Israeli authorities, have taken control of properties within Palestinian neighborhoods in East Jerusalem. (Photo: via Twitter)

An Israeli court on Sunday ruled in favor of a Jewish organization, that has been trying to evict a Palestinian family from their home in East Jerusalem, alleging that the land upon which the house was built previously belonged to Jews.

The Palestine Chronicle news website said that the legal ground for the ruling is based on an Israeli law, which gives Jews the right to claim properties that allegedly belonged to them in East Jerusalem while denying Palestinians the same right.

“The ruling could set a precedent for the eviction of an additional 700 Palestinians living in the Batn al-Hawa enclave of Silwan,” in occupied East Jerusalem, wrote Nir Hasson in Israeli newspaper Haaretz.

The Palestinian Rajbi family has been residing in their East Jerusalem home since 1975. The Israeli judge has now ordered their eviction.

The head of the family, Nasser Rajbi, is responsible for the welfare of 22 people, including his children and grandchildren. “One of his daughters is seriously disabled, while his 25-year-old son suffered a heart attack two-and-a-half months ago and has since been in a coma,” the newspaper reported.

According to the United Nations Office for the Coordination of Humanitarian Affairs in the Occupied Territories (OCHA), “in recent decades, Israeli settler organizations, with the support of the Israeli authorities, have taken control of properties within Palestinian neighborhoods in East Jerusalem and established settlement compounds.”

“Palestinian houses have been transferred to settler organizations by various means. In some cases, settlers have pursued court cases to evict the Palestinian residents, on the grounds that the land or buildings were owned by Jewish individuals or associations in East Jerusalem prior to 1948,” OCHA said in a recent report.

The three-story building belonging to Nasser al-Rajabi will be handed to the Israeli settler group of Ateret Cohanim – a decision that will affect children, elderly, and persons with disabilities.

Ateret Cohanim has launched dozens of lawsuits against some 100 Palestinian families living in Batn al-Hawa, putting 700 people at risk of eviction, according to Israeli human rights group Peace Now.

Batn al-Hawa lies south of the Old City near the neighbourhoods of Silwan and Wadi al-Hilweh, which have also been targeted by settler groups seeking to expropriate Palestinian residents and carry out archaeological excavations under Palestinian houses.

“Some 14 Palestinian families have already been evacuated from Batn al-Hawa, and nearly 100 more families are facing court proceedings in eviction cases,” Peace Now said in a statement.

Meanwhile, Israeli NGO Ir Amim warned in a statement that "if Ateret Cohanim is successful, Batn al-Hawa is anticipated to become the largest settlement compound in a Palestinian neighborhood in the Old City Basin, with the outcome of significantly tightening the emerging ring of state-sponsored settlement activity around the Old City and severely undermining the possibility of a future two-state solution in Jerusalem".

Rajabi told MEE that he had been fighting his family's eviction case for the last four years, adding that another 88 houses were also at risk of eviction in the area.

“By what right do they come and ask us to leave and claim that this land is theirs?" Rajabi said. "Israeli police and intelligence always harass us and we have been fined every time we refurbished the houses or added a room to it.”