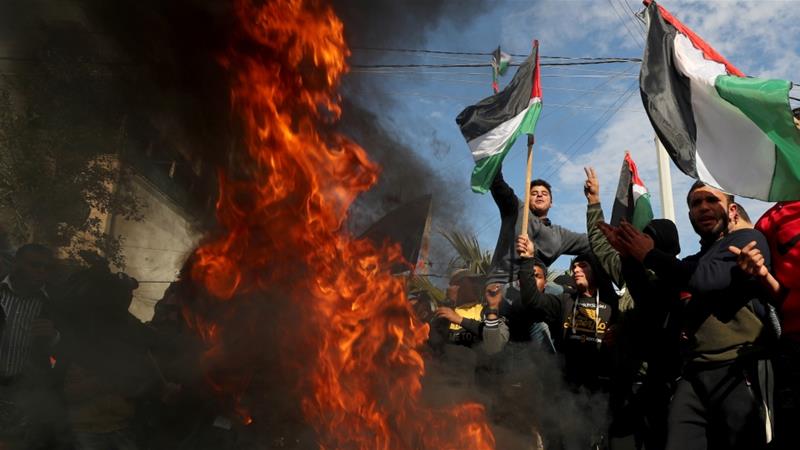 Palestinians protest as tyres burn ahead of the announcement by US President Donald Trump of his long-delayed Middle East plan, in Gaza City [Mohammed Salem/Reuters]

The US President Donald Trump is repeating history by establishing a new Balfour Declaration, the Palestinian Foreign Ministry said on Tuesday, in reference to the US so-called “deal of the century”.

The Balfour Declaration was issued on November 2, 1917, following Britain's pledge to establish "a national home for the Jewish people". It turned the Zionist aim of establishing a Jewish state in Palestine into a reality.

The British pledge has been viewed as one of the main catalysts of the Nakba - translating as "The Catastrophe", in reference to the mass exodus of at least 750,000 Arabs from Palestine. It is regarded as one of the most controversial and contested documents in the modern history of the Arab world.

Trump revealed his plan on Tuesday with Israeli Prime Minister Benjamin Netanyahu standing by his side at the White House.

The unveiling of the Israeli-US plan for the region comes at a crucial moment for Trump and Netanyahu, both of whom are facing upcoming elections and domestic tensions.

Introducing the proposal as a "win-win solution" for both Israelis and Palestinians, he claimed the deal would ensure the establishment of a two-state solution for the Israeli-Palestinian conflict.

Trump led his statement by introducing the Israeli side of the plan, announcing that Jerusalem would remain the "undivided capital" of Israel, adding that this has "already been done". He also said he hoped to implement the plan "immediately".

Netanyahu, speaking after Trump, thanked the US president for a "historic day" and said the plan would see Israeli law implemented in the occupied West Bank's Jordan Valley as a means to ensuring the security of Israel.

Shortly after the announcement, mosques across the occupied Palestinian territories launched the call to prayer in a move to announce their rejection of the deal and their readiness to fight against it.

Hundreds of Palestinians have taken to the streets in the West Bank to denounce the plan, while hundreds of others continued to demonstrate in the Gaza Strip.

Short Link : http://bit.ly/2O5LxT0
Tags
Next News
Jordanian PM: There Is No Alternative Home for Palestinians
Previous News
Palestinians Take to Streets in Response to Trump's ‘Deal of Century’
Most Views
Related Posts