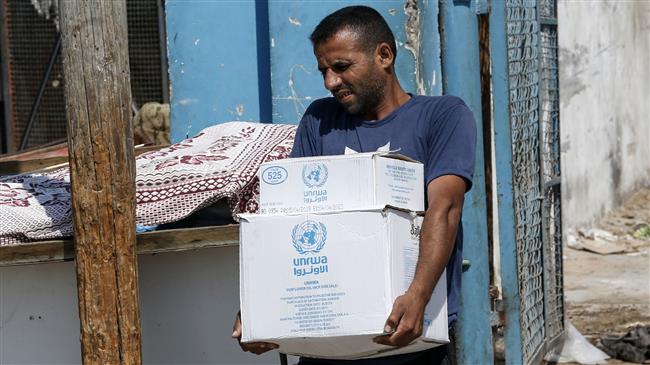 A Palestinian man transports boxes of food outside an aid distribution center run by the United Nations Relief and Works Agency (UNRWA) in the central Gaza Strip refugee camp of Bureij on July 31, 2019. (Photo by AFP)

The U.N. aid agency for Palestinian refugees voiced concern on Friday that the U.S. administration's Middle East peace plan will spark further violence, saying Palestinians have been in shock over the extremely unsettling plan.

Christian Saunders, head of the U.N. Relief and Works Agency for Palestine Refugees (UNRWA), asked about the U.S. plan which would not allow Palestinians’ right of return to Israeli-occupied territories, said that this right was "enshrined in international law and various (U.N.) General Assembly resolutions"

"We certainly have serious concerns that (the U.S. plan) it will result in an escalation in clashes, violence," Saunders told a Geneva briefing. "Palestinian refugees also look to us for reassurance in times like this when their rights and safety come under threat."

Palestinians are in a “state of shock” over the US’s new Middle East peace plan, the head of the UN’s agency for Palestinian refugees added, voicing fears of a surge in violence.

Saunders’ comments came after US President Donald Trump on Tuesday released the plan, which was seen as heavily biased towards Israel and angrily rejected by Palestinians.

It recognizes Israeli sovereignty over all of its West Bank settlements and the Jordan Valley, as well as an undivided Jerusalem.

The plan also backs a Palestinian state with a capital on the outskirts of Jerusalem but says the Palestinian leadership must first recognize Israel as a Jewish homeland and agree to a demilitarized state.

Trump presented the long-awaited proposals alongside close ally Israeli Prime Minister Benjamin Netanyahu, who soon signaled he would seek to annex a large part of the West Bank.