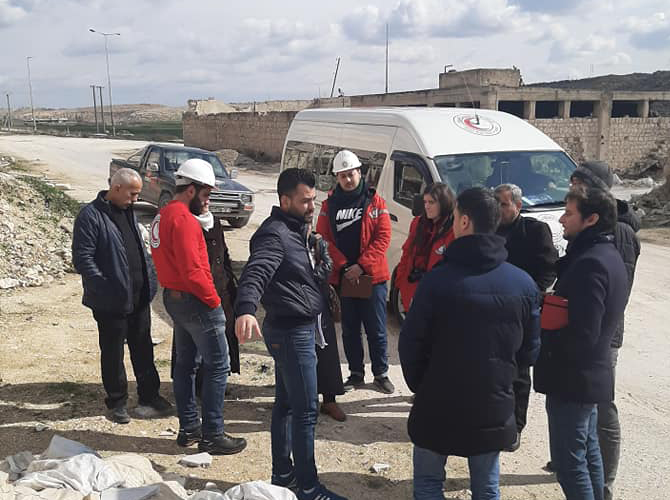 Palestinian refugees have been grappling with dire conditions in Handarat camp due to the lack of humanitarian assistance and life-saving services.

A Swiss delegation and a representative of the International Red Cross Committee in Syria paid a visit to Handarat camp for Palestinian refugees, north of Syria, on February 11, in an attempt to scrutinize living conditions in the camp.

The delegation assessed the condition of vital facilities, infrastructure, and water network.

Palestinian refugees have been grappling with dire conditions in Handarat camp due to the lack of humanitarian assistance and life-saving services. The majority of families have been taking shelter in buildings rented at extremely steep costs in the poverty-stricken area. A severe water and power crisis also continues to rock the camp.

Heavy shelling on Handarat and bloody shootouts between the government forces and the opposition outfits led to the destruction of over 90% of buildings in the camp. The confrontations culminated in the government’s takeover of the camp along with other zones in Aleppo and the displacement of its residents.

Handarat Camp (also called Ein AlTel Camp) is located to the northeast of Aleppo’s Hill, overseeing the Turkey-bound traffic lanes. It stands on a rocky hill and is situated some 13 kilometers away from the city center.

According to data by the General Commission of Arab Palestinian Refugees in Syria, some 8,000 Palestinian refugees used to take shelter in Handarat Camp. Only 200 displaced families returned to the camp following the heavy onslaughts launched by the Syrian regime forces.