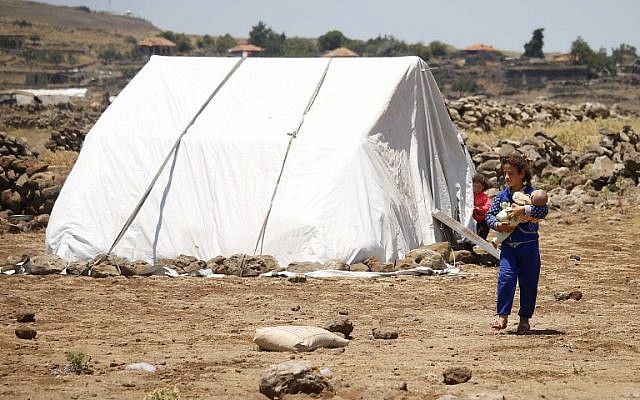 A displaced girl from the Daraa province fleeing shelling by pro-government forces carries a toddler in a makeshift camp in the province of Quneitra, southwestern Syria, on June 22, 2018. (AFP/Mohamad Abazeed)

The United Nations Relief and Works Agency for Palestine Refugees in the Near East (UNRWA) has opened two schools—Tabaria and AlSafsaf—in Daraa camp for Palestinian refugees, south of Syria.

Director of UNRWA operations in Syria Michael Amanya and director-general of the General Authority for Palestinian Arab Refugees Ali Mustafa attended the inauguration.

As many as 700 students (from 1st to 9th grade) taking refuge in the area have been deprived of their right to attend school, as the new academic year saw the day.

Prior to the conflict, back in 2010, six UNRWA schools had been operative in Daraa Camp, before they shut their doors as a result of the bloody shootouts.

A number of homes have been used as alternative schools, where dozens of students are often crammed into one single room that lacks equipment, ventilation and hygiene. Double shift classes are made available in order to boost students’ academic output.

The war in Syria has had disastrous fallouts on civilians’ intellectual skills and academic performance, with hundreds of Palestine refugees dropping out of school over security concerns or following psychological breakdowns. A number of education facilities have also been turned into prisons or field hospitals, imperiling Palestinians’ academic careers.