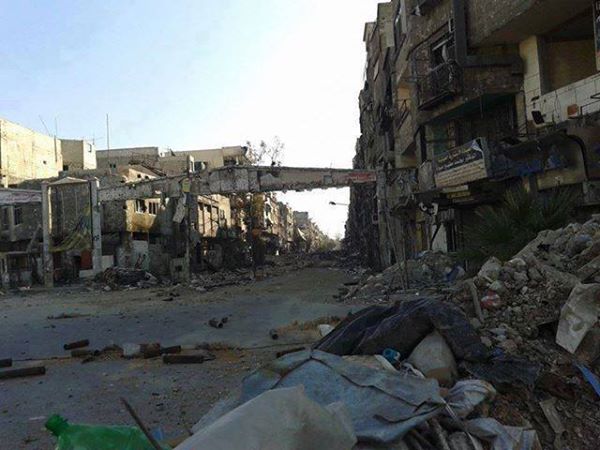 Over 80% of buildings in Yarmouk have gone either totally or partially destroyed in the Syrian warfare. Photo via: AGPS

Palestinian activists have urged the Syrian government, Palestinian Authority, and United Nations Works and Relief Agency for Palestine Refugees (UNRWA) to seriously work on facilitating the access of Palestinian families to their homes in Yarmouk Camp, in Damascus, from which they have been displaced due to war-related causes.

The activists quoted displaced Palestinian families as appealing to all concerned parties to work on securing their safe return to their homes in order to retrieve their properties and belongings.

The cash-stripped families slammed the silence maintained by Palestinian political factions in Syria and the General Authority for Palestinian Arab Refugees, saying several families have been left without roofs over their heads due to the steep rental fees imposed by house owners outside of the camp.

Scores of Palestinian refugee families fled Yarmouk following the 33-day military operation launched by the Syrian government forces on April 19. The Syrian government regained control over Yarmouk Camp and southern Damascus towns following the military operation. Dozens of civilians were killed and dozens more injured in the offensive. Over 80% of buildings in Yarmouk have gone either totally or partially destroyed in the warfare.

A few months earlier, the United Nations Institute for Training and Research (UNITAR) published the results of an assessment of the damage to Syrian cities caused by seven years of relentless bombardment by the incumbent regime and its allies since 2011.