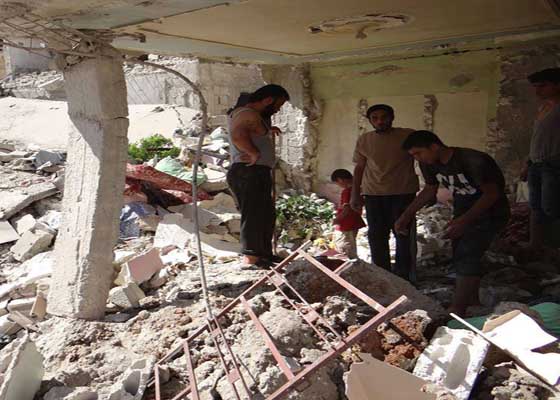 This week marks the sixth anniversary of a massacre perpetrated by the Syrian regime army on AlMuzeireeb Palestinian refugee community in Daraa, south of Syria.

The Syrian government forces targeted Al-Zaytoun school and a local clinic run by UNRWA with barrel bombs on February 18, 2014, taking away the lives of over 18 civilians, including schoolchildren and instructors.

The Action Group for Palestinians of Syria documented several other mass killings against Palestinian refugees across the war-ravaged Syrian territories. This includes the so-called “Mig Massacre”, also known as “Abdul Kader AlHusaini massacre”, in reference to the onslaughts launched by the Syrian fighter jets on Abdul Kader AlHusaini Mosque, in Yarmouk camp for Palestinian refugees, in Damascus.

At the time of the attack, the mosque served as a shelter for hundreds of families who fled the deadly strikes on the camp. Dozens of civilians, including children and women, were killed in the massacre. The event marked the largest mass exodus from Palestinian refugee camps in Syria.