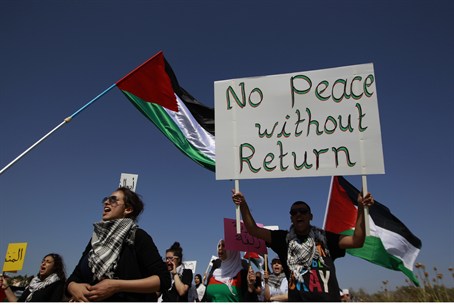 Approximately 750,000 Palestinians were displaced and became refugees as a result of the 1948 war which led to the founding of present-day Israel. Photo via: Reuters

Thursday, February 19, marks the launch of the so-called “Return … My Right, My Decision” international campaign initiated by the Palestinian Return Centre (PRC), in cooperation with other human rights partners, in an attempt to raise awareness about Palestinians’ inalienable right to return to their homeland—Palestine.

PRC—an organization in consultative status with the United Nations Social and Economic Council—aims to collect millions of signatures by Palestinian refugees on a petition confirming their commitment to their internationally-guaranteed right of return and rejection of the US/Israel endeavors to negate Palestinians’ refugee status, before forwarding the final list to the UN.

The petition reads as follows: “My right of return to my homeland in Palestine, from which we have been displaced, is an inalienable, individual and collective right guaranteed by international law and international treaties. No party is entitled to underrate this right, no matter the circumstances. The ‘alternative homeland’ projects and any initiatives that strike at the intrinsic foundations of the right of return and negate it are illegitimate and null, and do not represent me in any possible manner.”

Approximately 750,000 Palestinians were displaced and became refugees as a result of the 1948 war which led to the founding of present-day Israel. None of these displaced persons were ever allowed to return to the homes or communities from which they were displaced and the Palestinian refugee population has continued to grow in the time that has passed since 1948.