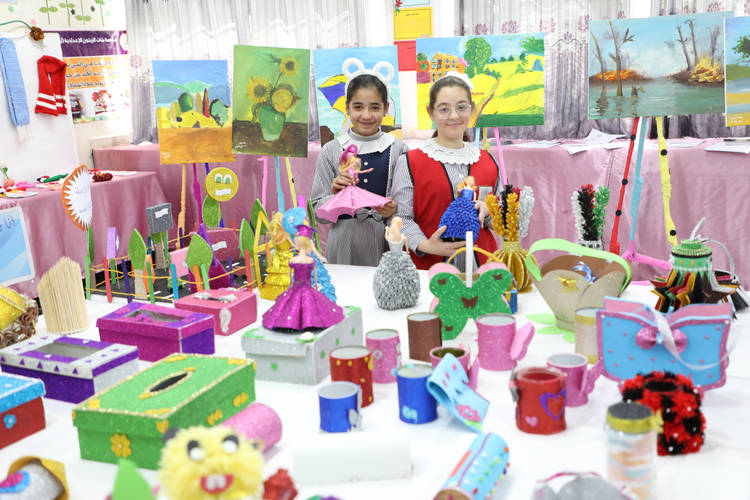 A so-called “arts & crafts” class has been created by the United Nations Relief and Works Agency for Palestine Refugees (UNRWA) at Al Zaitoun Preparatory Girls’ School in Gaza in an attempt to enhance the personal and interpersonal skills of schoolchildren.

In photos published on UNRWA’s official website, schoolchildren are crowded around an arts & crafts table covered with crayons, scissors, glitter and brightly colored snippets of cardboard, before presenting their pieces to the group.

The protracted trauma of living under occupation took its toll on many schoolchildren in the blockaded coastal enclave. Such classes help students overcome the heavy toll of the dire humanitarian condition.

“During the first semester of school, we received several complaints about students who showed behavioral challenges inside and outside the classroom. From the bullying, to class disruption and social isolation,” said Ms. Maysoon Abdel-Hadi, school principal at the UNRWA al-Zaitoun Preparatory Girls’ School ‘C’. “As a team, we decided to create an arts activity group for them.”

Some 120 students were selected to participate in a four-month arts and crafts work initiative aimed at creating a stimulating and creative environment, where a release of tension and anxiety is achieved through artistic expression.

“I was hyperactive and distracted in school. I didn’t like to stay in class for long periods of time and none of my classmates liked me,” said Nisma Shehada, a fifth-grade student.

Teaching staff have guided the students through the initiative for the past four months. “We’ve worked on developing students’ social and life skills by unleashing their creativity in a safe space. They’ve been provided with guidance on how to interact with their classmates and teachers. We also encouraged parent involvement in the program, which has resulted in very positive results!” said school principal Maysoon Abdel-Hadi.

“I was very shy and found it hard to communicate with my friends and teachers,” said Maryam al-Sendawi, a fifth-grade student. “This initiative has reinforced my self-confidence and I’m grateful to my teachers and classmates who supported and encouraged me on this journey.”

“Ever since this program started, I’ve been able to work on my patience. The crafts help me focus my extra energy and now I’m able to make new friends in class,” shared Nisma Shehada, another fifth-grade student.

Through its network of 276 UNRWA schools across the Gaza Strip, the UNRWA education program strives to provide equitable and inclusive education to 282,000 Palestine refugee children from grades 1-9.

The recurrent hostilities on the besieged Strip have exacerbated the effects of the ongoing Israeli blockade, which is set to enter its 14th year this summer. The blockade continues to have a devastating impact on people’s lives, with severely restricted freedom of movement, crippling the economy and rendering the majority of the population dependent on humanitarian aid to meet their basic needs.