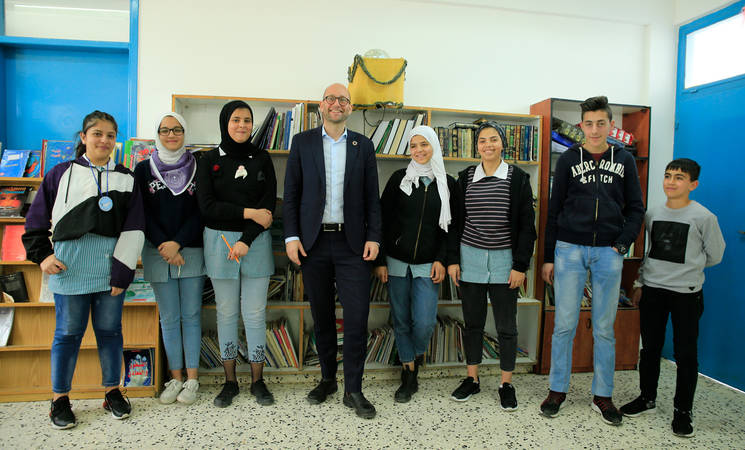 Danish Minister of Development Cooperation, Mr. Rasmus Prehn, announced a contribution of approximately US$ 15.5 million (DKK 105 million DKK) to the United Nations Relief and Works Agency for Palestine Refugees in the Near East (UNRWA) for 2020.

According to a statement by UNRWA, the amount represents a 50 per cent increase in Denmark’s funding to the Agency from US $ 10 million in 2019. This contribution to the Agency’s core budget will help deliver essential education, health care and social services across the five fields of operation.

“I am very pleased to announce a substantial increase in Denmark’s core support to UNRWA to approximately US$ 15.5 million in 2020. UNRWA delivers quality core services to around 5.6 million Palestine refugees. It is clear that UNRWA plays a key role both in securing a better life for the many refugees and for creating stability in the region,” Minister Prehn said.

Minister Prehn visited the UNRWA Basic Girls’ School in Jalazone refugee camp near Ramallah, where he saw key services provided by the Agency, such as education and health, and was briefed on some of the protection challenges that the Palestine refugee community regularly faces in the camp.

Students shared their hopes and dreams for the future and explained the importance of their work as members of the UNRWA school parliament, particularly in providing mediation during school disputes, and promoting the concepts of tolerance and human rights amongst their peers and within their community.

Gwyn Lewis and Matthias Schmale, Directors of UNRWA Operations in the West Bank and Gaza, respectively, accompanied the Minister.

“The Government of Denmark has been a valued long-term contributor and partner,” said Acting Commissioner-General of UNRWA, Christian Saunders. “This generous increase in Denmark’s contribution is an important expression of solidarity with Palestine refugees comes at a time of serious financial and political challenges for UNRWA. I thank the Government of Denmark for its support and solidarity with UNRWA”.