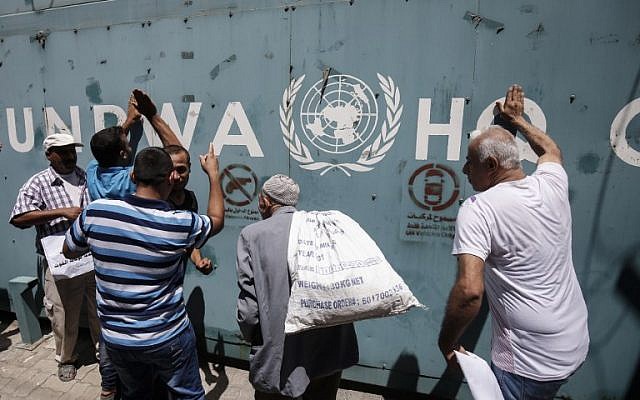 Employees of the UN Relief and Works Agency for Palestine Refugees in the Near East (UNRWA) and their families protest against job cuts announced by the agency outside its offices in Gaza City on July 31, 2018. (AFP Photo/Said Khatib)

The United Nations Relief and Works Agency for Palestine Refugees (UNRWA) has announced its decision to suspend the salaries of day laborers (staff hired and paid one day at a time) after it has had its operations curtailed in its five fields of operations in response to COVID-19 outbreaks.

On March 23, the Agency said day workers will receive their wages only for their working days during March month. Days spent away from their workplaces following instructions given to that end by the Agency will not be reimbursed.

Human rights groups have warned of the catastrophic repercussions of such a measure on thousands of families who have no others sources of income. The situation of day laborers and low-income households who have lost their livelihoods due to the state of emergency inflicted by COVID-19 outbreaks will take an alarming turn for the worse.

In an area like the Gaza Strip, where nearly 2 million Palestinians live behind a blockade and are refused access to the other occupied Palestinian areas and the rest of the world, such measures mean that the tragedy could reach a point of no return.