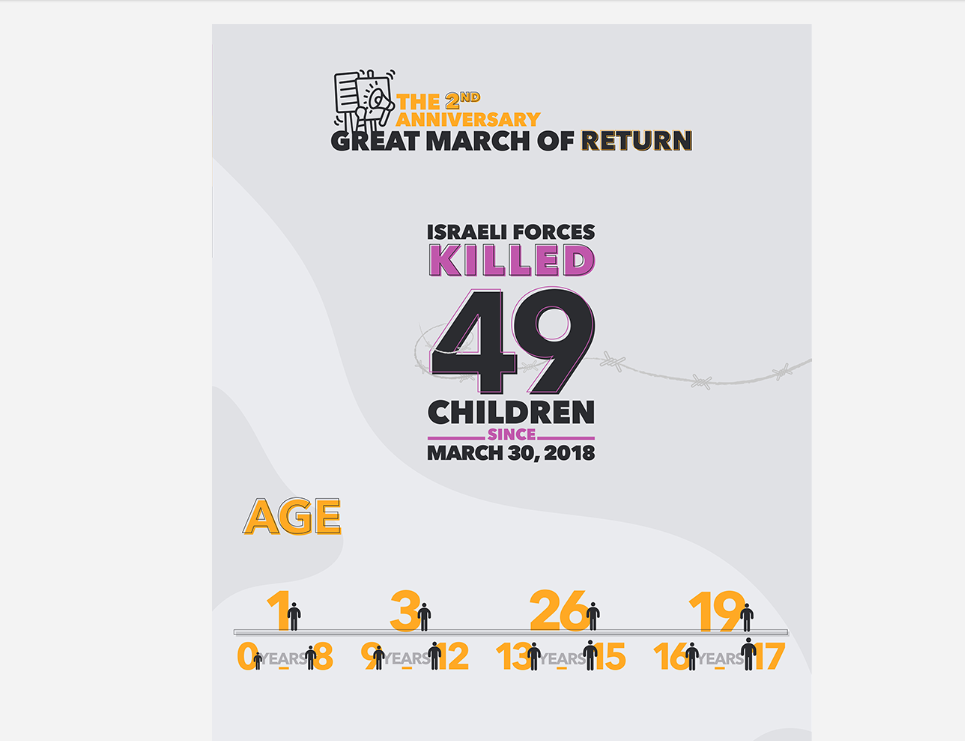 After two years, there has been no justice and accountability for the unlawful killing and maiming of Palestinian children during weekly demonstrations in the Gaza Strip, despite well-documented evidence of war crimes committed by Israeli forces, Defense for Children International (DCI) has reported.

In a report released on March 30, 2020, DCI said since March 30, 2018, Israeli forces have killed at least 49 Palestinian children in the context of demonstrations near the Gaza perimeter fence.

According to evidence collected by DCI Palestine, during the same period, Israeli forces killed an additional 32 Palestinian children in the occupied West Bank, including East Jerusalem, and the Gaza Strip. In the overwhelming majority of these 81 cases, the children did not pose a direct, mortal threat at the time of their death.

UN verified information shows at least 714 Palestinian children were injured with live ammunition in 2018 alone across the Occupied Palestinian Territory, including 629 children in the Gaza Strip, according to a UNICEF-led working group monitoring grave violations against children during armed conflict.

A recent report by Haaretz showcases Israeli snipers keeping a tally of how many knees they shot at the border, highlighting the systemic use of unjustified intentional lethal force against Palestinians.

While children affected by armed conflict are entitled to special respect and protections under international law, Israel regularly violates these protections by either directly targeting children or through indiscriminate and disproportionate attacks that result in avoidable child fatalities and injuries, added DCI.

One example is the killing of 14-year-old Othman Hilles. Israeli forces shot and killed Othman on July 13, 2018, near the perimeter fence east of Gaza City. Video shows Othman calmly walking up to the fence before a live bullet struck him in the chest and exited through his back. He posed no direct or mortal threat to Israeli forces at the time he was killed.

Mass civilian demonstrations, known as the “Great March of Return," began in the Gaza Strip on March 30, 2018. Protestors demanded an end to Israel’s closure of the Gaza Strip, now nearing its 13th year, and protested Palestinian refugees’ inability to return to properties lost during events surrounding the establishment of the state of Israel in 1948. Approximately 70 percent of the Gaza Strip’s current 2 million residents are registered refugees of Palestine, according to the UN Relief and Works Agency (UNRWA).