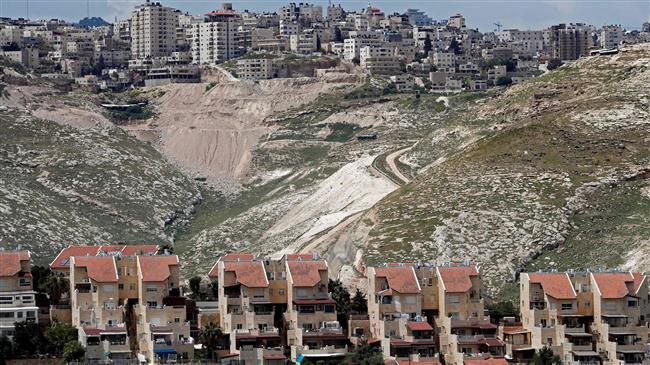 This picture taken from the Israeli settlement of Maale Adumim shows some buildings of Maale Adumim in the occupied West Bank (bottom) and the outskirts of Jerusalem al-Quds (up) on April 18, 2019. (By AFP)

Palestinian Prime Minister Mohammad Shtayyeh has called on the Middle East Quartet to urge Israel to cease its plans to annex other parts of the occupied Palestinian territories, reported Wafa News Agency.

Speaking during a meeting with the European Union (EU) Representative Sven Kühn von Burgsdorff over the video conference, Shtayyeh urged the Quartet to pressurize Israel to cease its plans to annex the Jordan Valley and the illegal colonial settlements in the occupied West Bank.

He warned that such a move, among other moves that Israel would take in the context of the implementation of the US-touted Mideast plan, dubbed deal of the century, would destroy the two-state solution and frustrate the prospects for an independent and viable Palestinian state.

He underscored the need to convene an international peace conference with the purpose of finding an equitable and comprehensive solution to the Palestinian question.

“Israel, the occupying power, has to assume its responsibilities towards Palestinians in Jerusalem. If it does not want to do so, it has to allow us to operate and help our Palestinian population in Jerusalem, whether they are residing inside the Israeli-imposed borders of Jerusalem or outside them,” said Shtayyah.

The EU Representative assured Stayed that the EU, as a longstanding and reliable partner of the Palestinian people, will do its utmost to assist the Palestinian Authority during such a critical stage.