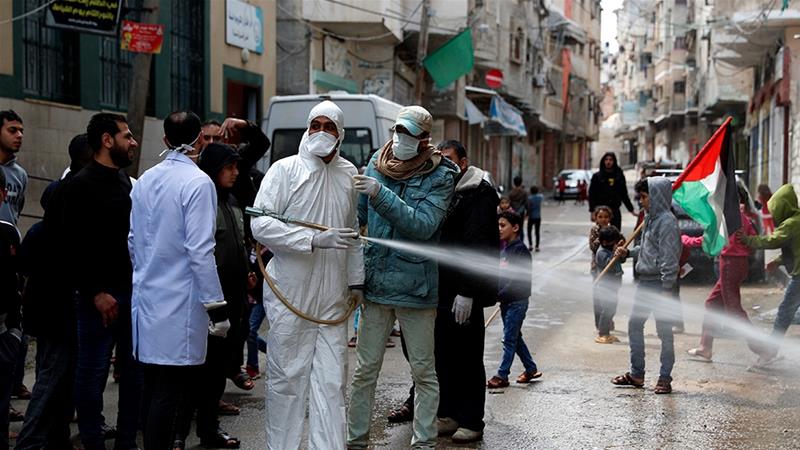 A worker wearing protective gear sprays disinfectant as a precaution against the coronavirus, in Gaza City [Adel Hana/The Associated Press]

The United Nations Relief and Works Agency for Palestine Refugees in the Near East (UNRWA) signed an agreement for a US$ 1 million contribution from KSrelief, in support of the Agency’s efforts to combat the COVID-19 pandemic in Gaza.

The agreement was signed by Adviser at the Royal Court, the General Supervisor of the Centre, Dr. Abdullah Al-Rabeeah and UNRWA Commissioner-General Philippe Lazzarini. This funding will provide life-saving medical devices, equipment and protective supplies to Palestine refugees in Gaza.

Speaking at the signing, Lazzarini said: “KSRelief is providing vital life-saving support that will enable UNRWA to procure medical equipment and supplies required to fight the COVID-19 pandemic and help save the lives of Palestine refugees in Gaza.”

UNRWA has a long-term relationship with KSrelief. KSRelief has been a strategic partner for the Agency, supporting its health services to Palestine refugees in Gaza and Lebanon.

Years of socioeconomic decline, conflicts and closure have contributed to the weakening of the health sector across Gaza, with irregular maintenance of the infrastructure and uneven access to new medical supplies and equipment. This contribution will boost the Agency’s efforts to prevent and respond to the COVID-19 pandemic and help the vulnerable community of Palestine refugees in Gaza.

Last month, UN Secretary-General Antonio Guterres expressed concern over the alarming situation in the besieged Gaza Strip in light of the propagation of the novel coronavirus COVID-19.

"There are dramatic humanitarian needs for these people even without this pandemic”, he said. "It is very difficult for these people to be living in self-isolation. There, households often don't have water, no soap, and healthcare facilities are extremely rudimentary. So we need to boost the response capacity in those areas".