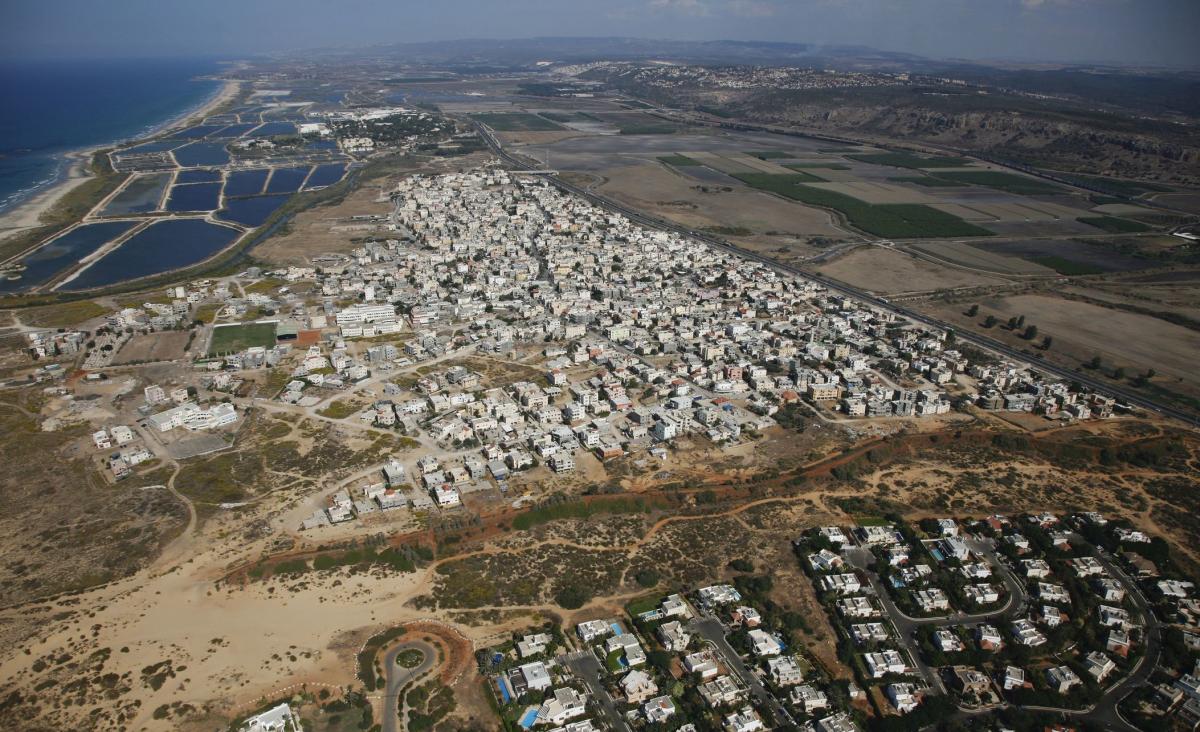 Jisr al-Zarqa, the only Palestinian town in Israel on the Mediterranean, bordered to the south by an earthen berm separating it from the predominantly Jewish town of Caesarea. Aerial photography taken between 2011 and 2015. © Lowshot Ltd

The Israeli government’s policy of boxing in Palestinian communities extends beyond the West Bank and Gaza to Palestinian towns and villages inside Israel, Human Rights Watch (HRW) said on Tuesday.

According to HRW, the policy discriminates against Palestinian citizens of Israel and in favor of Jewish citizens, sharply restricting Palestinians’ access to land for housing to accommodate natural population growth.

Decades of land confiscations and discriminatory planning policies have confined many Palestinian citizens to densely populated towns and villages that have little room to expand. Meanwhile, the Israeli government nurtures the growth and expansion of neighboring predominantly Jewish communities, many built on the ruins of Palestinian villages destroyed in 1948. Many small Jewish towns also have admissions committees that effectively bar Palestinians from living there.

“Israeli policy on both sides of the Green Line restricts Palestinians to dense population centers while maximizing the land available for Jewish communities,” said Eric Goldstein, acting Middle East executive director at Human Rights Watch. “These practices are well-known when it comes to the occupied West Bank, but Israeli authorities are also enforcing discriminatory land practices inside Israel.”

HRW said Palestinian citizens of Israel constitute 21 percent of the country’s population, but Israeli and Palestinian rights groups estimated in 2017 that less than 3 percent of all land in Israel falls under the jurisdiction of Palestinian municipalities. The majority of Palestinians in Israel live in these communities, although some live in “mixed cities” like Haifa and Acre.

Beginning in 1948 and in subsequent decades, Israeli authorities seized hundreds of thousands of dunams of land from Palestinians (10 dunams equals 1 hectare). Much of the confiscation took place between 1949, when Israel placed most Palestinians in Israel under military rule, and 1966, when military rule ended. During this period, Israeli authorities confined Palestinians in Israel to dozens of enclaves and severely restricted their movement. They also used various military regulations and new laws to seize land belonging to Palestinians who had become refugees or Palestinian citizens who were internally displaced, including by declaring land to be “absentee property,” taking it over, and later converting it to state land.

One historian estimates that of the 370 Jewish towns and villages established by the Israeli government between 1948 and 1953, 350 were built on land confiscated from Palestinians.

Land policies in more recent years have not only failed to reverse the earlier land seizures, but in many cases further restricted the land available for residential growth. Since 1948, the government has authorized the creation of more than 900 “Jewish localities” in Israel, but none for Palestinians except for a handful of government-planned townships and villages in the Negev and Galilee, created largely to concentrate previously dispersed Bedouin communities.

In the 1970s, Israeli authorities brought Palestinian towns and villages into the state’s centralized planning system, but planning processes have not significantly increased the land available for residential building. The authorities have zoned large sections of Palestinian towns and villages for “agricultural” use or as “green” areas, prohibited residential building in them, and built road and other infrastructure projects that impede expansion.

A 2003 Israeli government-commissioned report found that “many Arab towns and villages were surrounded by land designated for purposes such as security zones, Jewish regional councils, national parks and nature reserves or highways, which prevent or impede the possibility of their expansion in the future.”

These restrictions create density problems and a housing crunch in Palestinian communities. The Arab Center for Alternative Planning, based in Israel, told Human Rights Watch that it estimates that 15 to 20 percent of homes in Palestinian towns and villages lack permits, some because owners’ applications were rejected and others because they did not apply knowing that authorities would reject their requests on the grounds that they were contrary to the existing zoning.

HRW said international human rights law prohibits racial and ethnic discrimination, condemns “racial segregation,” and safeguards the right to adequate housing. The International Covenant on Economic, Social, and Cultural Rights (ICESR), which Israel has ratified, requires states to ensure that policies and legislation progressively realize the right to adequate housing for all segments of society. The body tasked with interpreting the covenant has said that “enjoyment of this right must … not be subject to any form of discrimination” and that “increasing access to land by landless or impoverished segments of the society should constitute a central policy.”

“Israeli land policies treat towns inside its own borders in starkly unequal terms based on whether its inhabitants are Jewish or Palestinian,” Goldstein said. “After decades of confiscating Palestinians’ land, Israel confines them to crowded towns while enabling neighboring Jewish towns that exclude them to flourish.”