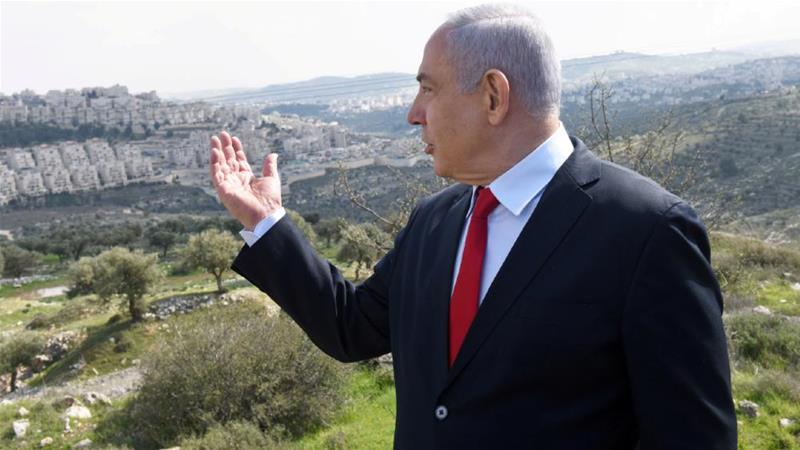 Israeli Prime Minister Benjamin Netanyahu overlooking the Har Homa settlement outside Bethlehem. Before the Israeli settlement was built, to limit the growth of the Palestinian city, the hill was named Jabal Abu Ghneim [Debbie Hill/Pool/Reuters]

Palestinian President Mahmoud Abbas will chair a meeting of the leadership on Saturday to take the appropriate decision in response to the Israeli plan to annex lands in the occupied West Bank, said Prime Minister Mohammad Shtayyeh on Thursday.

Speaking at a press conference in Ramallah on the coronavirus pandemic, Shtayeyh said: "Today a new government will be announced in Israel, and we will listen to its political program that calls for annexation of Palestinian lands and the imposition of [Israeli] sovereignty over the settlements."

"The President will chair a meeting of the Palestinian leadership next Saturday to take the appropriate decision and implement it to confront the Israeli plan, which aims to destroy the possibility of an independent, sovereign and independent State of Palestine," he said in a statement quoted by Wafa News Agency.

On the latest developments of the pandemic in Palestine, the premier said the health situation is currently stable and that the number of new cases is "negligible". He added that the recovery rate stands at 77 percent, and that no cases were placed in the ICU.