Despite Decades of Suffering, Our People Will Triumph, Says President Abbas on Nakba anniversary 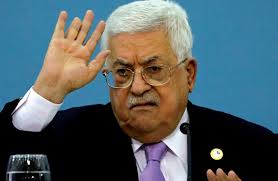 “The makers of our Nakba wanted Palestine to be a land without a people for a people without a land. They made a bet that the name of Palestine will be obliterated from the history books and they carried out all sorts of heinous conspiracies, pressures, massacres and liquidation schemes, the last of which is the so-called deal of the century, to achieve this goal. But all these were shattered by the grace of God on the rock of this great Palestinian people, who are deeply rooted in their land,” said Abbas in a statement quoted by Wafa News Agency.

"Despite all the obstacles, and despite all the aggressive occupation policies, measures and violations, we are proceeding with confidence towards restoring our full rights and removing this hateful occupation off our holy land,” added President Abbas.

"This sacred march will not stop until we raise the Palestinian flag on the holy Al-Aqsa Mosque and the Church of the Holy Sepulcher in Jerusalem, our eternal capital”, he vowed.

President Abbas said the Palestinians have sought a just peace in the region, but they will not wait forever for it.

"We have extended our hands for a just and comprehensive peace on the basis of the resolutions of the international legality. We still have hope to achieve that. But we will not wait forever. Nothing is more precious to us than Palestine, and nothing more honorable to us than our people and their national rights," he said.

The President warned that all agreements with Israel will be cancelled if the latter goes ahead and annexes occupied Palestinian territory.

"We will reconsider our position from all agreements and understandings, whether they were with the Israeli occupation state, or with the United States of America. We will be absolved of all of these agreements and understandings if the Israeli government declares the annexation of any part of our occupied lands, and we will hold the American and Israeli governments responsible for all its consequences and serious ramifications," he said.