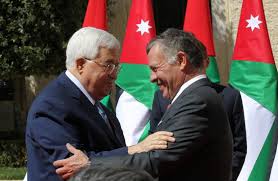 Jordan's king warned Israel of a "massive conflict" if it goes ahead with plans to annex large parts of the occupied West Bank, as European Union foreign ministers agreed to step up diplomatic efforts to try to head off such a move.

Jordan's King Abdulla II, in an interview published by Der Spiegel on Friday, issued a stark warning over Israel's plans.

"Leaders who advocate a one-state solution do not understand what that would mean," he said.

"What would happen if the Palestinian National Authority collapsed? There would be more chaos and extremism in the region. If Israel really annexed the West Bank in July, it would lead to a massive conflict with the Hashemite Kingdom of Jordan," he said.

"I don't want to make threats and create an atmosphere of loggerheads, but we are considering all options. We agree with many countries in Europe and the international community that the law of strength should not apply in the Middle East," he said.

"When the king himself comes out and essentially puts his relationship with Israel and the treaty with Israel on the line, its very serious," he told Al Jazeera from Arlington in the United States.

Jordan has been lobbying the EU to take "practical steps" to make sure annexation does not happen.

In a statement, Jordan's Foreign Minister Ayman al-Safadi "stressed the need for the international community and the European Union in particular to take practical steps that reflect the rejection of any Israeli decision to annex".