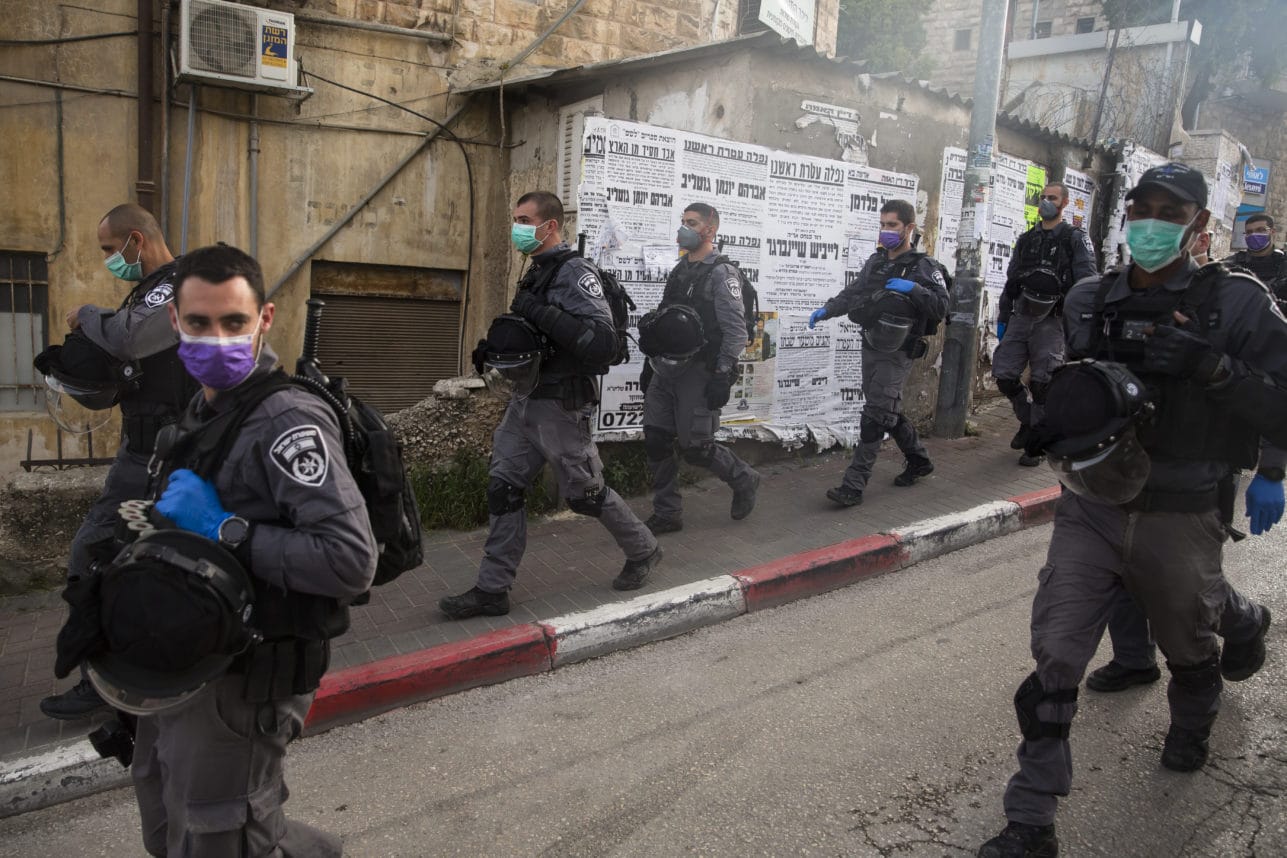 Israeli police troops patrol as they enforce a lockdown on March 31, 2020 in Jerusalem. Photo by Amir Levy/Getty Images

Israel’s policy regarding Palestinian neighborhoods in occupied East Jerusalem is driven by its goal to take over as much land as possible and expand its control as far as it can while doing what it can to degrade their residents, according to a new report by the Israeli human rights organization B’Tselem.

In the report titled: “This is Jerusalem: Violence and Dispossession in al-'Esawiyah”, B’Tselem said that in the case of the Palestinian neighborhood of al-'Esawiyah, the ongoing, violent police operation there “throws into relief what Israel has already made clear regarding the Palestinian neighborhoods of East Jerusalem: as occupier, it sees the people who live there as no more than subjects who can be treated as it wishes.”

It said, “Since annexing East Jerusalem, Israel has viewed the Palestinians who live there as an unwanted addition. The policy it implements in these neighborhoods – which is particularly blatant in al-'Esawiyah – is aimed at incessantly pressuring the residents. In the short term, this is meant to oppress Palestinians in the city, control them and keep them poor, underprivileged and in a state of constant anxiety. Given Israel’s declared intention to ensure a Jewish demographic supremacy in Jerusalem, the long-term goal of this cruel policy appears to be to drive Palestinians to breaking point, so that they 'choose’ to desert their homes and leave the city”.

“This conduct clearly demonstrates the demographic considerations that guide Israel’s actions: preferring Jewish citizens over unwanted Palestinian residents. Accordingly, the Israeli authorities incessantly harass the entire Palestinian population of Jerusalem, including the blatant example reviewed in this report: the 22,000 people who live in al-'Esawiyah. This abuse, which is the result of an ongoing policy led by all Israeli governments since 1967, lays bare Israel’s priorities in the only part of the West Bank it has – as yet – taken the trouble to formally annex: no equality, no rights, and not even reasonable municipal services. Instead, state authorities use their power in the annexed territory to cement the superiority of one group over another” added the report.

The report said that “for more than a year now, the Israel Police has engaged in a violent campaign in al-’Esawiyah. Special Patrol Unit and Border Police forces regularly enter the neighborhood for no reason, without any prior occurrence that could justify police presence, much less the presence of aggressive paramilitary forces on such a large scale. Special Patrol Unit and Border police officers, armed from head to toe enter the neighborhood with vans, jeeps and drones and intentionally create arbitrary instances of violent 'friction’ that disrupt routine and make daily life extremely difficult in the neighborhood. Among other things, they randomly close off main streets, creating long traffic jams; use loudspeakers on patrol cars and police vehicles late at night; provoke residents by aiming weapons at them; conduct degrading inspections and search cars and bags (including children’s schoolbags); verbally goad residents; order shops to shut down for no apparent reason, without showing a warrant; use dogs to search shops; raid homes and search them without a warrant; and falsely arrest minors (sometimes in the middle of the night), in severe violation of their rights. Initially, regular police officers also patrolled the neighborhood, took up positions at exit points and ticketed drivers, business owners and passers-by for negligible infractions.”

B’Tselem said that since occupying the West Bank in 1967, Israel has taken over more than 90% of al-’Esawiyah’s land using expropriation, declaration of “state land” and military seizure. While in 1945, al-'Esawiyah land spanned some 10,000 dunums, today, the neighborhood’s 22,000 residents have access to less than 1,000 dunums. Most of this area is densel built, and there are hardly any land reserves for construction leading to extreme poverty, over-crowdedness, and building chaos.