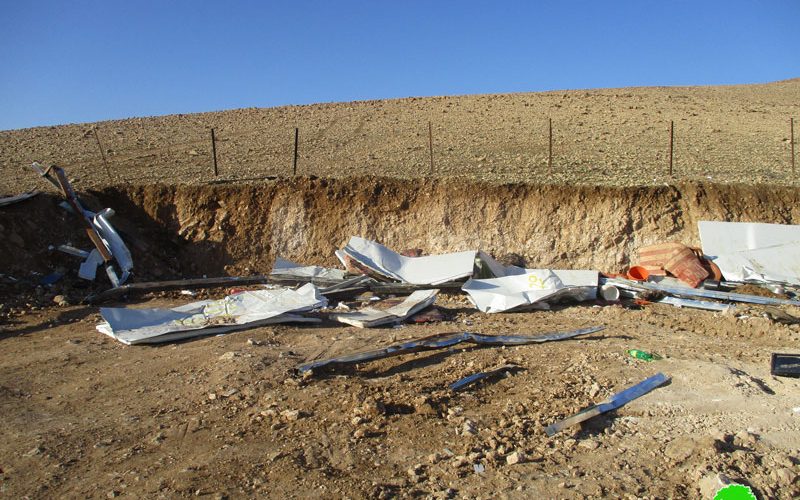 Israel demolishes Palestinian houses and structures almost on a daily basis as a means to achieve “demographic control” of the occupied Palestinian territories. Photo via social media

Israeli forces on Wednesday have issued orders to stop the construction of two mobile homes aiming to give shelter to Palestinian families in al-Auja town, located to the north of Jericho city.

According to local sources, Israeli military forces ordered Palestinian citizen Ali Rashayda to immediately stop the construction of his two mobile homes and evict all the residents.

Al 'Auja is a Palestinian town in the middle of Jericho Governorate located (horizontally) 9.8 km north of Jericho City. Al 'Auja is bordered by the Jordan River to the east, Fasayil village to the north, Kafr Malik and Deir Jarir villages' lands (in Ramallah Governorate) to the west, and An Nuwei'ma town to the south.

According to a study by the Applied Research Institute in Jerusalem, most of the town’s population resides in area “A” which constitutes a small proportion of the total area of the town. The rest of the town area, constituting 89,879 dunums (84.5% of the total area), was classified as area “C”, where Israel retains full control over security and administration related to the territory. In area “C” Palestinian building and land management is prohibited unless through a consent or authorization by the Israeli Civil Administration.

Thousands of dunums have been lost in Al ’Auja by Israeli confiscations in order to build settlements on the town’s lands, or to construct Israeli bypass roads to connect neighboring settlements to one another. Israel has confiscated 2,257 dunums (2.1% of the total town’s area) since the Israeli occupation of the West Bank. Lands have been confiscated to build 4 Israeli settlements which are currently inhabited by more than 600 Israeli settlers.

Israeli confiscations have continued, resulting in the seizure of more lands of Al ’Auja, leading to the loss of many areas for Israeli purposes, including the establishment of an Israeli Military Base over an area of 2,152 dunums in order to protect the Israeli settlements existing over Al ’Auja lands and neighboring regions.

The Israeli Occupation Forces (IOF) helped the Israeli settlers to move and settle in those outposts, in addition to protecting and providing them with the necessary infrastructure to guarantee their continued existence.

Al ’Auja is one of these Palestinian localities that had, during the past few years, their lands forcibly seized for the establishment of 3 outposts; “Omer Farm”, “West Niran” and “East Niran”. The Israeli Government also confiscated more lands in the town to open bypass roads 90 and 449 to connect established Israeli settlements with each other and with the nearby settlements.