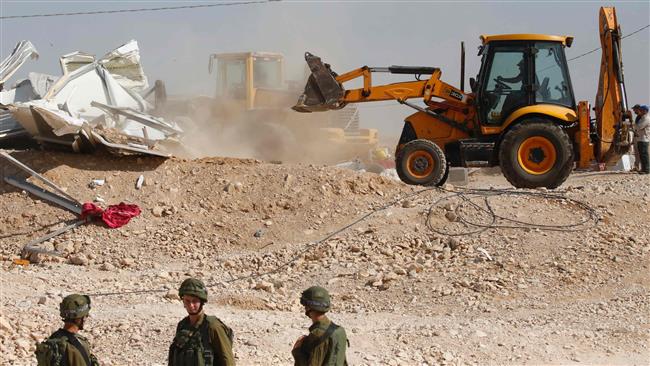 Israeli troops and bulldozers are seen as they demolish houses in the Palestinian bedouin village of Khashm al-Daraj in the southern area of Yatta, south of the West Bank city of al-Khalil (Hebron), on August 14, 2017. (Photo by AFP)

Six Palestinian families were informed a few days earlier by the Israeli army that the homes they built in the village of al-Tira, southwest of Ramallah, will be demolished.

Head of al-Tira village council Abdul Jaber Mohammad told WAFA News Agency that an army force broke into the village and handed six families demolition orders claiming that their homes were built in Area C, which is under full Israeli military rule.

The 4000-dunum village and its 1650 residents are regularly harassed by the Israeli army, said Mohammad, who a few days ago seized a tractor a farmer was using to plow his land and destroyed a road that connected al-Tira to nearby Beit Ur village.