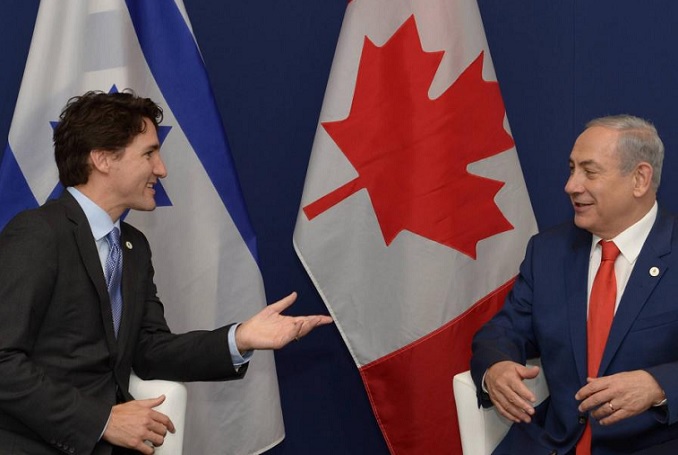 Four Chretien-era cabinet ministers are among 58 former Canadian diplomats and politicians who added their names to a letter calling on Prime Minister Justin Trudeau and his government to show stronger resistance to a proposed Israeli annexation of a large part of the occupied West Bank, according to Canadian news agency CBC.

Among the signatories are former ambassadors to Israel who served under both Liberal and Conservative governments, as well as many other diplomats who represented Canada's interests in the Middle East.

"We are writing to you as retired Canadian diplomats, proud of Canada's historical commitment to multilateral institutions and its reputation for supporting the rule of law," the letter begins.

"As you know, Israel's Prime Minister Benjamin Netanyahu has announced publicly his intention to 'annex' in the coming weeks a significant amount of land that Canada, and the international community, recognize as occupied Palestinian Territory”, it said.

In an email response to CBC News' request for comment on the letter, Global Affairs Canada spokesperson Adam Austen said "Canada remains firmly committed to the goal of achieving a comprehensive, just and lasting peace in the Middle East. We have long maintained that peace can only be achieved through direct negotiations between the parties."

He added: "Canada is very concerned that Israel moving forward with unilateral annexation would be damaging to peace negotiations and contrary to international law.

Asked about Canada's position at his daily COVID-19 briefing Tuesday morning, Trudeau said his government was committed to seeing a two-state solution.

"I have highlighted both publicly and directly to Prime Minister Netanyahu and alternate Prime Minister Benny Gantz the importance of staying away from measures that are unilateral and our deep concerns and disagreement with their proposed policy of annexation," Trudeau said.

"We think that the path forward is a two-state solution reached to by dialogue between the parties involved and anything that is unilateral action by either side is unhelpful in the cause of peace."

In their letter, the former diplomats reminded Trudeau that the acquisition of territory through military conquest is illegal, and that the UN Security Council voted on eight occasions between 1967 and 2016 to forbid it in the case of the occupied territories of the West Bank.

"We would like to urge you to publicly acknowledge Canada's commitment to multilateralism and the rule of law by issuing a statement that Canada reaffirms its position in support of all relevant UN resolutions", said the letter.

"As you are no doubt aware, many of our allies have already spoken out opposing the Israeli proposal ... As former Canadian diplomats, we urge you to protect Canada's good name in the international community by speaking loudly and clearly on this issue."

The letter follows a statement from the Prime Minister's Office on annexation that some of the former diplomats said they found weak and non-committal.

The Trudeau government frequently presents itself as a champion of law and a rules-based international order.