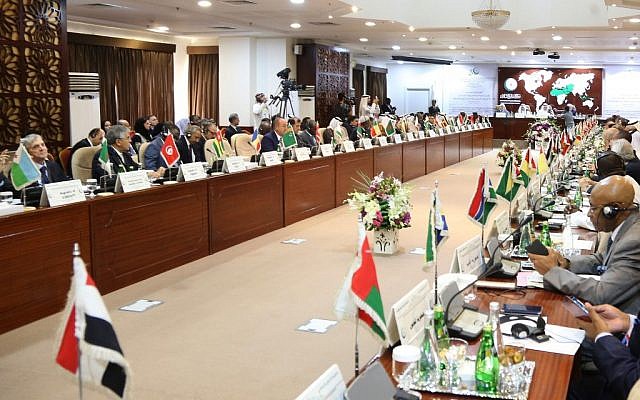 Foreign ministers of the Organisation of Islamic Cooperation meet in the Saudi capital Riyadh on September 15, 2019. (AFP)

The General Secretariat of the Organization of Islamic Cooperation (OIC) is slated to hold a virtual open-ended extraordinary meeting of the Executive Committee at the level of Member States’ Foreign Ministers on Wednesday 10 June 2020 to discuss the Israeli occupation’s threat to annex parts of the territory of the State of Palestine occupied in 1967.

According to a statement by OIC, the meeting will be chaired by the Minister of Foreign Affairs of the Kingdom of Saudi Arabia, Prince Faisal bin Farhan Al Saud, Chair of the Executive Committee.

Ministers of Foreign Affairs, members of the Executive Committee and the Member States and the OIC Secretary General, Dr. Yousef A. Al-Othaimeen will be in attendance.

Israeli prime minister Benjamin Netanyahu has announced his government’s decision to annex the Jordan Valley along with the northern Dead Sea and large parts of the occupied West Bank. This area includes all illegal Jewish settlements built over the years as a means for Israel to assert its full sovereignty over the land.

The territory in question is supposed to be part of a future independent, viable and contiguous Palestinian state under the two-state solution. Israeli annexation of these areas would effectively end any prospect of the establishment of a Palestinian state in the remaining 22% of historic Palestine, which currently comprises the occupied West Bank, including East Jerusalem, and the besieged Gaza strip.