Tunisia Lashes Out at Israel’s Expansionist Policy in Occupied Palestine 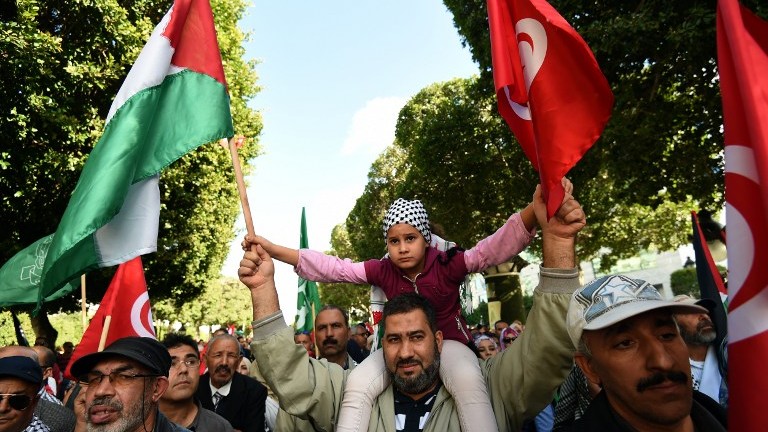 Tunisia called on the international community and global institutions to take urgent action to press Israel to comply with the peace track and prevent the implementation of its annexation plan, while warning of the serious repercussions of the Israeli expansionist endeavour and de facto policy.

Tunisian Minister of Foreign Affairs Noureddine Erray announced in a speech he delivered last week, during the virtual open-ended meeting of the Executive Committee at the level of member states’ foreign ministers affiliated with the Organisation of Islamic Cooperation (OIC), that the international community must assume its responsibilities “towards the Palestinian people and their just cause in the face of the alarming situation and occupation authorities’ intransigence.”

The emergency meeting of the OIC’s Executive Committee on the Palestinian issue took place amid the threats that Israel’s attempts to annex the lands of the West Bank posed.

Erray urged Tunisia’s partners among the donor countries to “support the efforts of the United Nations Relief and Works Agency for Palestine Refugees (UNRWA) aimed at enhancing the Palestinians’ resilience, protecting the refugees’ right of return and ending the displacement of the brotherly Palestinian people.”

He stressed that Tunisia, based on its non-permanent membership in the United Nations (UN) Security Council, will continue its efforts to support the Palestinian movement at the UN, especially the Security Council, by virtue of its responsibility to enforce respect for international law and its relevant resolutions.

The foreign minister expressed “Tunisia’s condemnation of the ongoing annexation policy of Palestinian territory and the legitimization of settlements in violation of international laws and resolutions, especially Security Council Resolution 2334 of 2016.”

He pointed out that all countries testify that the settlement policy undermines the achievement of the two-state solution and blocks any efforts for a peaceful compromise that opens up prospects for a lasting and comprehensive peace in the Middle East.

Earlier this month, the Chief Prosecutor of the International Criminal Court (ICC), Fatou Bensouda, expressed concerns about the annexation plan.