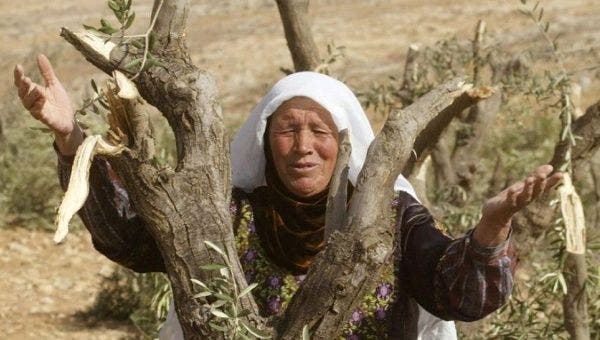 A Palestinian woman stands with an olive tree after it was cut down in the West Bank village of Litwane, January 6, 2006 near the Jewish settlement of Ma'on. | Photo: Reuters

Israeli forces uprooted dozens of olive trees belonging to Bardala village in the northern Jordan Valley, according to the Palestinian news agency WAFA.

The Jordan Valley covers an area of about 1.6 million dunams (1,600 km2) and constitutes around 30 percent of the total occupied West Bank.

According to a previous government report, the Valley includes about 280,000 dunams of arable land, 50,000 of which are still used by Palestinians and 27,000 by illegal Jewish settlers.

The majority of the Jordan Valley is under full Israeli military control, despite being within the West Bank.

Meanwhile, at least 44 percent of the total land in the Jordan Valley has been expropriated by Israeli forces for military purposes and training exercises.

Israel has announced that it would illegally annex the highly strategic Jordan Valley on July 1.