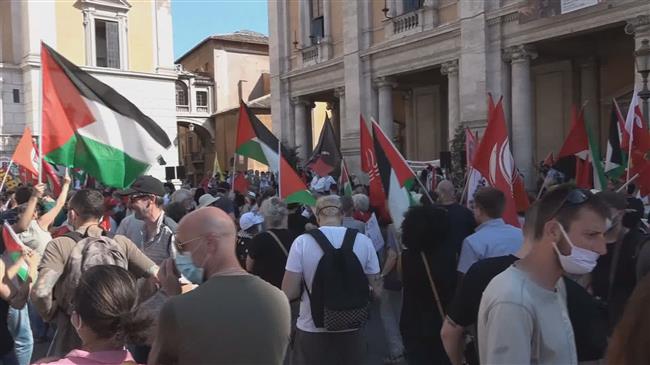 Rallies against Israel’s unilateral plan to annex large swaths of the occupied West Bank and Jordan Valley were held in 18 Italian cities, including Rome, Milan, Naples and Bari.

In the Italian capital, thousands of people gathered in Campidoglio, the seat of the mayor's office and of the town administration, to have their voices heard on Prime Minister Benjamin Netanyahu's annexation push, according to Press TV.

Protesters at the rally on Capitoline hill argue that an annexation of parts of occupied West Bank would not only violate international law but it would likely inflame tensions in the already volatile region.

The rally was called by a number of regional Palestinian communities and supported by hundreds of groups, including left-leaning political parties, Italy's three major unions CGIL-CISL and UIL, the National association of partisans ANPI and dozens of charitable and humanitarian organizations.

Over 1,000 European parliamentarians denounced Israel's annexation plan in past days saying the move would be fatal to the prospects of Israeli-Palestinian peace.