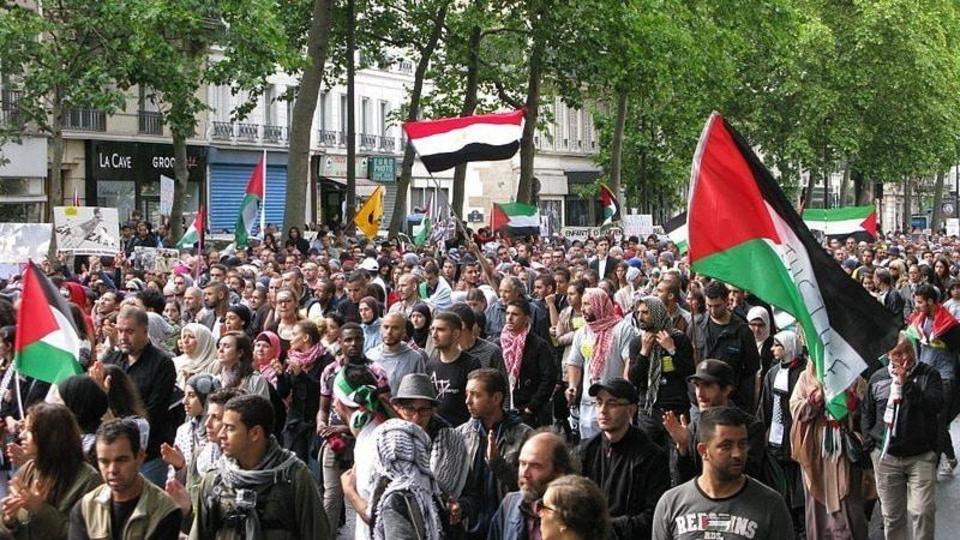 Protesters take to the streets of Paris against Israeli annexation plans. Photo via: ruptly.tv

A number of NGOs, activists, and French nationals demonstrated in Barbès, France on Saturday, in opposition to Israel's plans to annex 30% of the West Bank, reported Israeli news site The Jerusalem Post.

The protest was organized by groups such as Samidoun Palestinian Prisoner Solidarity Network, Euro-Palestine, Forum Palestine Citoyenneté and Collectif Argenteuil Solidarité Palestine, among others.

Those in attendance marched through the center of Paris - from Barbès to Châtelet - "in solidarity with Palestine and its resistance."

"The Israeli government of Netanyahu promised, with the support of the Trump administration and the complicity of the European Union, to directly annex a large portion of occupied Palestinian land in the West Bank on 1 July, a blatant violation of international law," Samidoun, who advocates for solidarity with Palestinian prisoners, wrote on their website.

"The claim to annex 30% of the West Bank, Palestinian territory occupied by Israel for 53 years, represents another blatant theft of Palestinian land and a new wave of ethnic cleansing that the Israeli colonizer has carried out against the Palestinian people since 1948," Samidoun added.

"This openly colonialist and racist regime feels even more confident on this criminal path as world news focuses on the coronavirus pandemic and its consequences. It hopes to divert attention from its ongoing crimes against the Palestinian people," they continued.

Over 1,000 European parliamentarians denounced Israel's annexation plan in past days saying the move would be fatal to the prospects of Israeli-Palestinian peace.