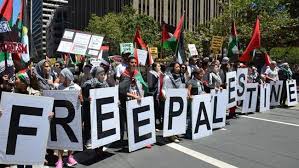 Pro-Palestine protesters rally in US. Photo via: parstoday

A letter signed by more than 100 progressive, anti-war, and faith-based U.S. organizations, urged presumptive Democratic nominee Joe Biden (and Donald Trump) to adopt a principled foreign policy towards Israel and the Palestinian people based on justice, freedom, equality, and human dignity.

The letter comes in the context of the 2020 Democratic primaries having experienced a monumental shift in leadership positions towards the state of Israel and the Palestinian struggle for freedom.

“We write to you as organizations and individuals deeply concerned about the continuing escalation of the conflict between Israel and the Palestinian people and the urgent need for a different U.S. policy — one based on the principles of equality and justice for all”, read the letter.

“Current U.S. positions supporting, indeed enabling, Israeli government violations are out of touch with voters. A February 2020 Gallup poll found increased support for Palestinians, especially among young people. The same is true for American Jews, who are becoming more and more critical of Israeli government policies and more and more supportive of Palestinian rights”, it added.

“Providing Israel’s government with unlimited diplomatic protection and massive military financing has enabled the country to entrench its occupation, expand its illegal settlements, impose a 13-year-long siege and wage three wars against Gaza, pass laws that officially deny equal rights to Israeli citizens who are not Jewish, all under the veneer of peacemaking”, it said.

The letter said that what many American voters, including many Jewish voters, young voters, and voters of color are looking for in presidential candidates includes explicit opposition to Israel’s occupation of the West Bank, including East Jerusalem, and its unlawful blockade (abetted by Egypt) of the Gaza Strip; an end to Israeli violations of Palestinian human rights and adherence to all relevant U.S. laws, including the Arms Export Control Act and the Leahy Law.

It urged the US to call on Israel’s government to repeal the Jewish Nation-State Basic Law and to ensure that Palestinian citizens of Israel and other non-Jewish citizens in the country enjoy equal rights with Jewish citizens by passing a basic law guaranteeing those rights.

It called for the rejection of U.S. recognition of Israeli sovereignty over any territories now occupied, absent an internationally recognized final agreement with the Palestinians.