Report: Over 4,000 Palestinians of Syria Died of War-Related Incidents Until 2019 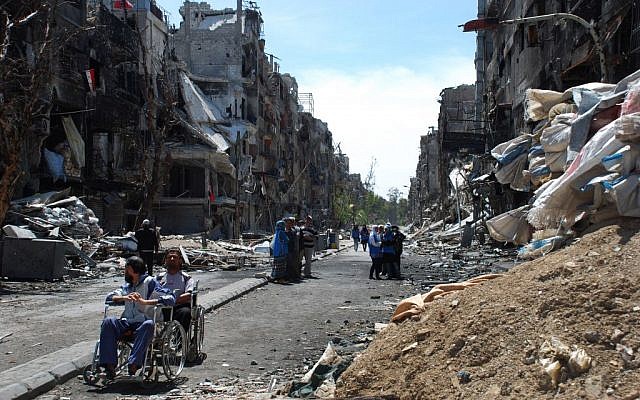 Two men on their wheelchairs, wait to receive food supplies at a damaged street in the besieged Yarmouk refugee camp, on the southern edge of the Syrian capital Damascus, Syria, Thursday April 24, 2014 (AP)

Entitled “Palestinians of Syria: Destruction and Reconstruction”, the report underscores the calamitous situation of Palestinian refugees in and outside the war-ravaged country due to war-related incidents.

The 280-page report provides fact-based data and statistics about the number of victims and detainees among the Palestinians of Syria.

As figures in the report, though the number of victims and detainees shrunk back compared to previous years, dozens of Palestinian refugees were pronounced dead in 2019.

The report also underscores the crises endured by the Palestinian community in displacement camps across and outside the Syrian territories.

At the same time, the study provides a detailed account of the violations perpetrated against the Palestinians of Syria in their quest to seek asylum and on their way to Europe.

The data has been compiled by a team of field reporters, news correspondents, journalists, photographers and researchers.

Hundreds of reports have also been released by the group on a daily basis in an attempt to draw the international community’s attention to the abject state of affairs endured by PRS.