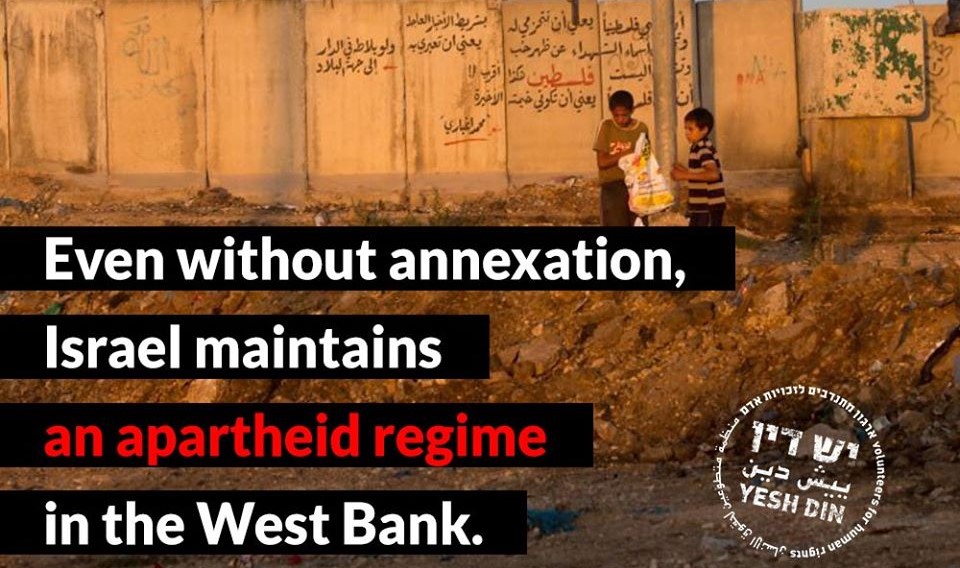 Yesh Din said that regardless of whether Israel’s government moves forward with its annexation plans, it is already upholding a system of apartheid in the occupied Palestinian territories. (Photo: Maki.org)

In his piece for Israeli non-profit organisation Yesh Din, prominent human rights lawyer Michael Sfard criticised Israel's occupation of the West Bank and plans to annex swathes of the territory.

“The conclusion of this legal opinion is that the crime against humanity of apartheid is being committed in the West Bank. The perpetrators are Israelis, and the victims are Palestinians”, said the lawyer.

“The crime is committed because the Israeli occupation is no ‘ordinary’ occupation regime (or a regime of domination and oppression), but one that comes with a gargantuan colonization project that has created a community of citizens of the occupying power in the occupied territory”, wrote Sfard.

He added that the crime is committed because, in addition to colonizing the occupied territory, the occupying power has also gone to great lengths to cement its domination over the occupied residents and ensure their inferior status.

“The crime of apartheid is being committed in the West Bank because, in this context of a regime of domination and oppression of one national group by another, the Israeli authorities implement policies and practices that constitute inhuman acts as the term is defined in international law: Denial of rights from a national group, denial of resources from one group and their transfer to another, physical and legal separation between the two groups and the institution of a different legal system for each of them. This is an inexhaustive list of the inhuman acts”, he said.

In his view, the separate policies and practices Israel applies in the occupied territory are designed to maintain and cement the domination and oppression of Palestinians and the supremacy of the Israelis who migrated to the area.

“That is not all. As described in this opinion, the government of Israel is carrying out a process of ‘gradual annexation’ in the West Bank”, warned the lawyer. “From an administrative perspective, annexation means the revocation of military rule in the annexed area and the territorial extension of powers held by Israeli authorities deep into the West Bank.”

“Continued creeping legal annexation, let alone official annexation of a particular part of the West Bank through legislation that would apply Israeli law and administration there, is an amalgamation of the regimes. This could mean strengthening the argument, which already is being heard, that the crime of Apartheid is not committed only in the West Bank. That the Israeli regime in its entirety is an apartheid regime. That Israel is an Apartheid state”, the piece further read.

“That is distressing and shameful. And even if not all Israelis are guilty of the crime, we are all responsible for it. It is our duty, each and every one of us, to take resolute action to stop the commission of this crime”, added Sfard.

Israel's planned annexation of parts of the West Bank was met with growing international opposition.

Last month, more than 1,000 European lawmakers from 25 countries called on their leaders to step in and stop Israel's planned annexation of parts of the occupied West Bank.

In the US, several senior pro-Israel Democrats have voiced their opposition to annexations, while their more leftist colleagues advocated for cutting US military aid to Israel if the Jewish state moves to annex parts of the West Bank.

Though Israel had planned to launch annexations on July 1, the plans have undergone some delays.