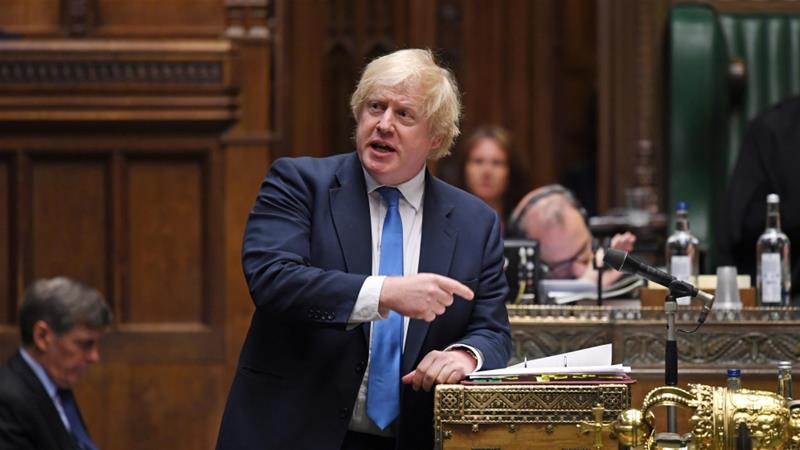 Britain''s Prime Minister Boris Johnson speaks during question period at the House of Commons in London on June 17, 2020 [Reuters/Jessica Taylor]

The UK Prime Minister, Boris Johnson, has spoken with the president of the Palestinian Authority, Mahmoud Abbas, to repeat his concerns about Israel’s proposal to annex parts of the West Bank.

Downing Street confirmed that Boris Johnson told Mahmoud Abbas during a phone call on Tuesday of the UK’s “opposition” to the move and offered his support to “foster dialogue” in the Middle East.

Johnson raised similar concerns with Israeli prime minister Benjamin Netanyahu during a call last week, cautioning that any attempt to annex territory would set back the prospects for peace in the region.

Netanyahu has been eager to begin annexing West Bank territory in line with US president Donald Trump’s much-criticised plan for the Middle East.

However, the plan appears to be on hold as Israel awaits a green light from Washington and deals with a fresh coronavirus outbreak.

A Downing Street spokesman said: “The Prime Minister spoke to Mahmoud Abbas, president of the Palestinian Authority, this evening”.

“He reiterated the UK’s commitment to the two-state solution and our opposition to annexation proposals in the West Bank”, he said. “The Prime Minister urged President Abbas to engage in negotiations and offered the UK’s support to foster dialogue”.

“The leaders agreed to continue to work together on this issue and others”, the same source added.

Johnson, writing for Yedioth Ahronoth newspaper earlier this month, warned that the annexation would be illegal and would jeopardise relations between Israel and the “Arab and Muslim world”.

He said: “Annexation would represent a violation of international law. It would also be a gift to those who want to perpetuate the old stories about Israel. I profoundly hope that annexation does not go ahead. If it does, the UK will not recognise any changes to the 1967 lines, except those agreed between both parties.”

The UN secretary-general, the European Union and key Arab nations have all said the annexation would violate international law and undermine the goal of creating a viable independent Palestine state alongside Israel.

In the 1967 Middle East war, Israel seized the West Bank. The international community considers Israel’s more than 210 settlements to be illegal.