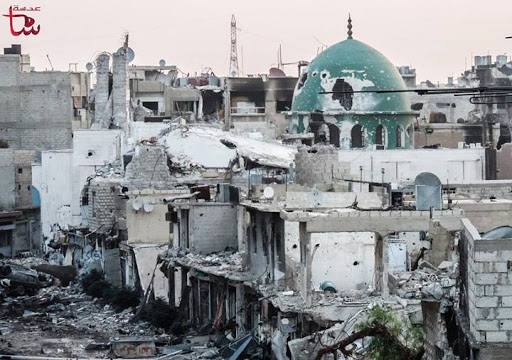 More than nine years into the Syrian conflict, Palestinian refugees taking shelter in Qaboun neighborhood in Damascus continue to struggle with an ambivalent fate.

The area has been severely damaged by the bloody shootouts and heavy shelling. Scores of Palestinian refugees have been chased down, arrested, and/or subjected to extra-judicial executions over political grounds.

Nearly some 1,200 Palestinian refugee families have sought shelter in Qaboun since 1948, 70% among whom are natives of AlTantoura town, north of the occupied city of Haifa. Several families fled the area over security concerns and after the Syrian and Russian fighter jets started to shower the area with randomly-unleashed missiles and mortars.

AGPS data indicates that 30 Palestinians from Qaboun neighborhood died of war-related incidents in Syria. Ten other refugees have been held in Syrian government prisons.

The Syrian government forces recaptured the neighborhood in May 2017, following a reconciliation agreement with the opposition groups. The residents have been denied free access out of and into the area. Entry/exit are only allowed on Thursday and Friday. Civilians are subjected to intensive search at checkpoints pitched around the main entrances to the area. The Syrian security forces continue to crack down on civilians’ free movement and turned the area into a closed military zone under the pretext that it is landmine-laden and uninhabitable.

Despite the traumatic fallouts of the conflict, several Palestinian refugees sheltered in Qaboun have achieved success stories and outstanding academic and professional careers. A number of them are lecturers and professors at Syrian universities. Others are shopkeepers and real estate owners.

The alarming situation of Qaboun residents is further jeopardized by the new reconstruction plan set forth by Damascus Governorate. Several families are likely to lose their houses and property.

Several residents of Qaboun neighborhood also fled to Europe, Turkey, and Egypt among other destinations. Others have become internally displaced in and around Damascus and northern Syria.

The area is made up of an industrial zone, comprising over 1,000 structures, and a residential zone, where the majority of buildings are unlicensed. Before 2011, Qaboun’s population was estimated at some 100,000.