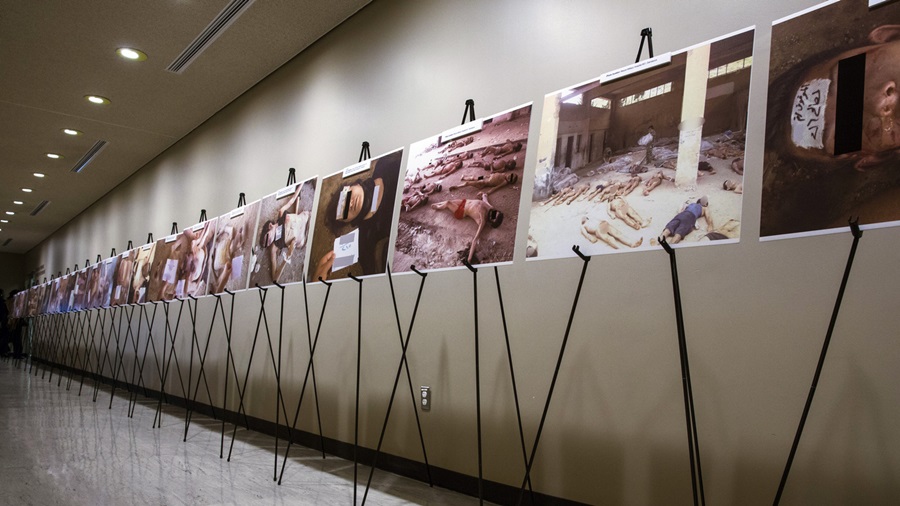 Last year, a report by the Syrian Network for Human Rights (SNHR) said that over 14,000 people had been tortured to death in the Syria war using 72 different methods of torture. (Photo via: Social media)

Washington has called for the immediate release of civilian prisoners from Assad’s jails and has requested for the UN to “double its efforts” to secure their release, Political Coordinator of the US Mission to the United Nations (UN) Rodney Hunter announced on Thursday.

Addressing the UN Security Council, Hunter asserted: “The Assad regime’s actions to delay justice for the families of political prisoners can no longer be overlooked.”

“The UN must redouble its efforts to secure the unilateral and large-scale release of civilians in regime custody as an urgent step to advance the political reconciliation process between the regime and the Syrian people.”

“The Syrian people need political and constitutional reforms which remove this fear of arbitrary detention by the Assad regime”, he added.

Hunter called on the Syrian regime to: “Immediately and unilaterally release the thousands of civilians being held arbitrarily in detention centres.”

Meanwhile, he pressed for the Syrian regime to: “Grant humanitarian organisations and the UN immediate access to all facilities to ensure that detainees’ medical care and preventative measures against the coronavirus are taken care of,” as well as for “the disclosure of lists of all detainees and missing persons, including death records and burial sites.”

According to statistics by the Action Group for Palestinians of Syria (AGPS), nearly 1,800 Palestinian refugees have been secretly incarcerated in Syria’s state-run lock-ups, where over 130,000 civilians are held.

Last year, a report by the Syrian Network for Human Rights (SNHR) said that over 14,000 people had been tortured to death in the Syria war using 72 different methods of torture.

The figure is likely to be much higher given that these figures reflect only what the organisation has been able to record.

The SNHR interviewed thousands of former detainees who survived prison and torture. Among the methods used were slicing off body parts and allowing junior doctors to practice surgical training on the prisoners. The doctors are encouraged to make medical errors.

Pouring boiling hot water on victims, burning them with chemical acids, whipping them on the feet, being bent through a tyre, pulling out finger and toenails using pliers and gouging out the eyes were also detailed.

In addition to this, detainees are denied access to medical treatment, deprived of using the toilet and other basic hygiene facilities, crammed into small, overcrowded cells and deprived of food and water.

A number of forms of sexual violence are carried out by security forces, including beating women so hard they lose their uterus.