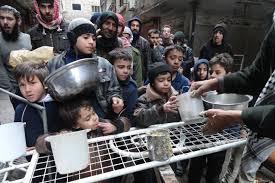 As the holy Eid AlAdha (festival of sacrifice) has been celebrated by Muslims across the globe, Palestinian refugees in war-torn Syria have been deprived of the joy ordinarily sparked by such an occasion.

In a place where vital facilities and leisure amenities have been damaged by the warfare, the advent of Eid means that dozens of displaced Palestinian and Syrian families spend the occasion in their poorly-equipped camps and shelters.

Palestinian refugees in Syria (PRS) continue to launch cries for help over their deteriorating humanitarian condition due to the sharp decrease in the exchange rate of the Syrian pound compared to the USD and their lack of access to the local labor market. The price leap has also overburdened the cash-stripped refugees. House rents have seen a striking hike from previous years.

The refugees continue to urge UNRWA and all other concerned parties to increase financial aid, help the displaced families return to their refugee camps, and provide much-needed relief services for Palestine refugees.

Over 90 per cent of Palestine refugee households in Syria live in poverty and 40 per cent remain in protracted displacement as a result of conflict and the damage and destruction of their homes, warned the UN Agency for Palestine Refugees.

At the same time, photos circulated on social media networks show Palestinian refugee camps as being evacuated. The majority of Palestinian families have fled their houses and shelters for fear of being killed in the bloody shootouts.

A Palestinian refugee from Yarmouk Camp said the majority of families have abandoned their houses in the camp, dubbing the area “a ghost city”.

The situation has been just as tragic in other displacement camps across the Syrian territories, including Handarat and Deraa refugee camps.

Since the start of the crisis in 2011, UNRWA estimates that 120,000 Palestine refugees have left Syria for neighboring countries, and beyond.