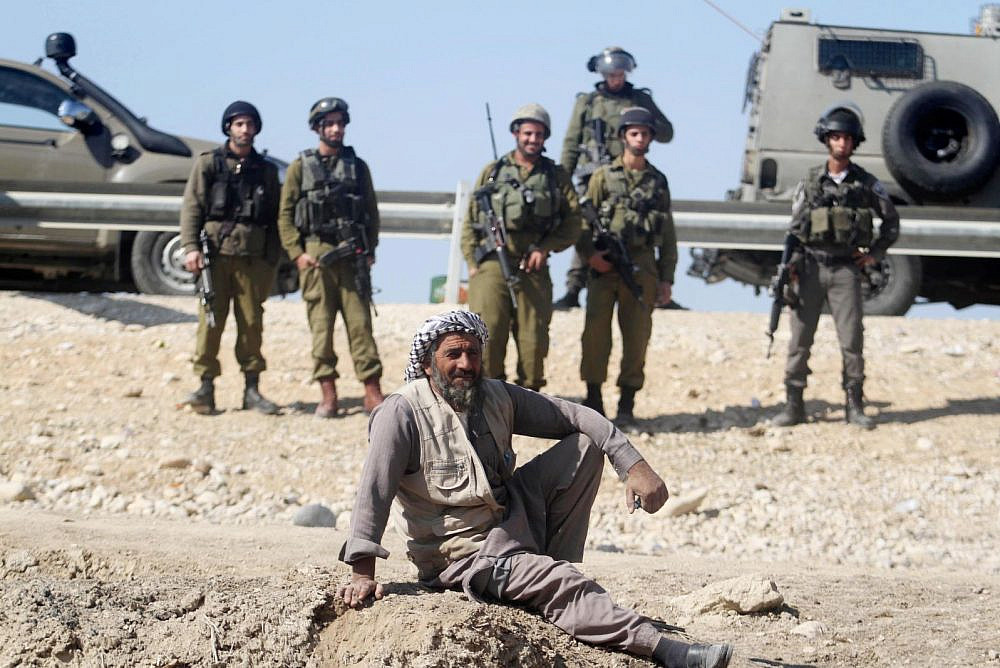 A Palestinian man rests by Israeli soldiers near the site of the old village known as Ein Hijleh, in the Jordan Valley near the West Bank city of Jericho, February 5, 2014. (Issam RiImawi/Flash90)

Israeli forces on Wednesday uprooted some 100 palm trees in the village of Al-Jiftlik near Jericho, in the occupied Jordan Valleys, the Palestinian news agency WAFA reported.

Mayor of al-Jiftlik Ahmad Abu Ghanem told WAFA that the Israeli forces uprooted and seized some 100 palm trees belonging to Anwar Abu Joudeh, in the area of Al-Shuna.

Located 33 kilometers to the north of Jericho, al-Jiftlik has a population of some 5,500, who predominantly depend on agriculture and livestock for their main source of livelihood.

Under the Oslo Accords, Israel maintains full control over the village, classified as Area C, and has allowed the villagers to build within a small pocket of 972 dunams, which accounts for 0.005 of the total village area.

Israel has severely restricted Palestinian access to water in the area, particularly the 23 underground wells used for agriculture. Local water springs are susceptible to dryness and depletion as a result of Israel’s control over water.

The Israeli water company of Mekorot has depleted the wells and has been granted a monopoly on the excavation, restoration, distribution and selling of water. In contrast, Palestinians have been forbidden from constructing new wells and restoring existing ones.