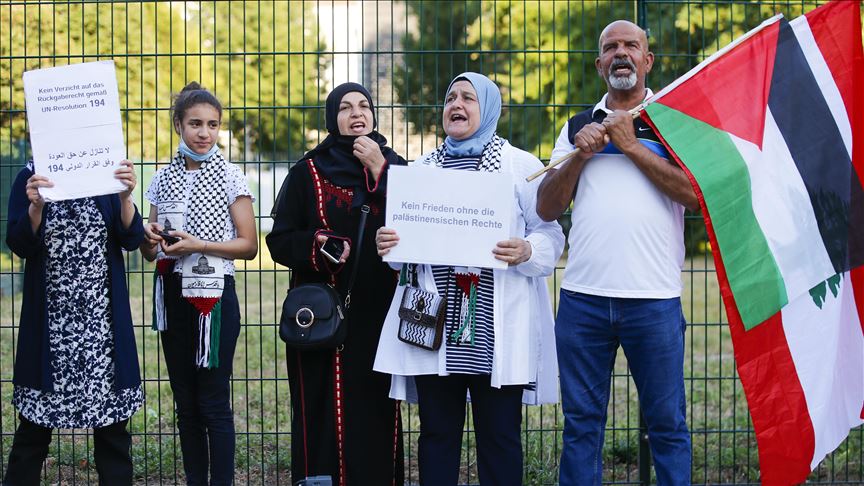 A group of Palestinians gathered at the UAE’s Embassy in Berlin on Monday to protest against the normalization deal between the Gulf state and Israel. (Photo: Anadolu Agency)

A group of Palestinians gathered at the UAE’s Embassy in Berlin on Monday to protest against the controversial deal between the Gulf state and Israel aimed at normalizing bilateral relations, reported Anadolu Agency.

Chanting in Arabic “Palestine is Arab” and “The Emirates are Zionist”, protesters voiced anger over the UAE’s decision to establish full diplomatic ties with the Jewish state.

Many protesters carried signs saying “Down with the traitors”, “Jerusalem is the capital of Palestine”, “Down with the unfair deal of the century”, “We will not forego our right of return based on UN Resolution 194” and “No peace without ensuring Palestinians rights.”

Speaking to Anadolu Agency on the sidelines of the rally, a Berlin-based Palestinian activist Assaad Kanaan said: “We are standing in front of the UAE embassy to say we are shocked over the agreement between the US, Israel and the UAE.”

“This agreement gives more rights to Israel in the Middle East but our question is: Where are the rights of the Palestinians? That’s the problem,” Kanaan added.

He stressed any agreement or political initiative has to also take into account Palestinian rights.

Israel and the UAE announced last week establishing full diplomatic relations in a US-brokered deal that will see the Jewish state postpone plans for annexation of land it already illegally occupies in the West Bank that is sought by the Palestinians for their future state.

Reacting to UAE-Israeli plans to normalize ties, Palestinian leadership strongly condemned the move accusing the UAE of “selling out its friends".

A spokesman for Palestinian President Mahmoud Abbas, Nabil Abu Rudeineh said reportedly the deal was a "betrayal of Jerusalem, Al-Aqsa and the Palestinian cause."

Hanan Ashrawi, an outspoken member of the Palestinian Liberation Organization's executive committee who has served in various leadership positions in Palestine, said the UAE's announcement was the equivalent of being "sold out" by "friends", according to the Qatari-based Al Jazeera Media Network.