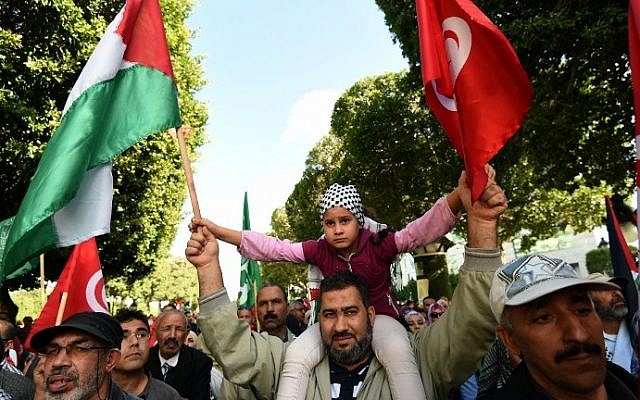 Tunisians shout slogans, as they wave the Palestinian and Tunisian national flags, during a solidarity protest on November 7, 2015, in Tunis. (AFP PHOTO/FETHI BELAID)

Scores of Tunisians staged a protest outside the embassy of the United Arab Emirates (UAE) on Tuesday against the Gulf state’s deal to normalize relations with Israel, reported Anadolu news agency.

“Palestine is Arab,” and “Victory for Gaza” were among banners waved by demonstrators during the rally, amid chants decrying the deal as “treason”.

"The deal undermines the Palestinian cause and is a betrayal of the Arab position on the Palestinian problem,” Salah Daoudi, a member of the Tunisian Network to Address Normalization System, an NGO that organized the rally, told Anadolu Agency.

On Monday, the Tunisian parliament condemned the normalization deal, describing it as an infringement of the Palestinian people's rights and a threat to the Arab and Islamic position which rejects normalization.

Last week, Israel and the UAE announced establishing full diplomatic relations in a US-brokered deal that allegedly will see the Jewish state postpone plans for annexation of land it illegally occupies in the West Bank that is sought by the Palestinians for their future state.

Palestinian groups have denounced the normalization deal, saying it does nothing to serve the Palestinian cause and ignores the rights of Palestinians.