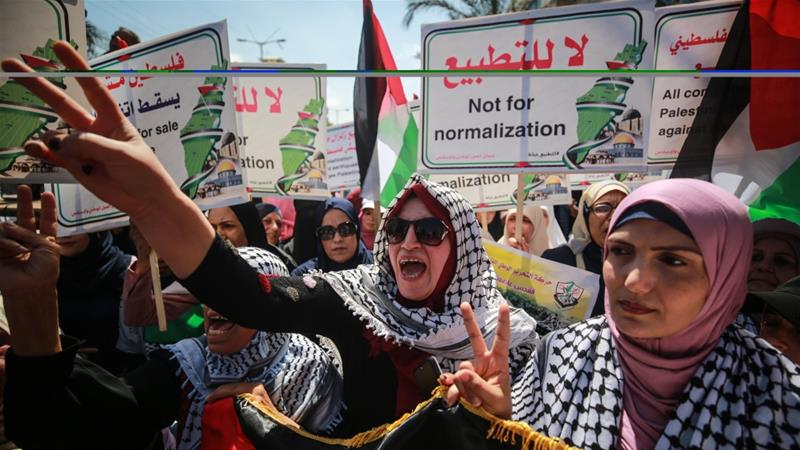 Palestinians gather to protest against a deal between the UAE and Israel to normalise ties, in Gaza City, Gaza [Anadolu Agency]

Hundreds of Palestinians this week held protests in the occupied West Bank against last week’s announcement that Israel was normalizing ties with the United Arab Emirates.

Members of all Palestinian factions took part in this week’s rallies in a rare joint initiative, an AFP journalist reported.

“Today we tell the world that we are united against ‘the deal of the century’, annexation and normalization,” Palestinian prime minister Mohammed Shtayyeh told a rally in the village of Turmus’ayya.

The announcement last week that Israel and the energy-rich UAE would normalize ties sparked fury among Palestinians, with both Hamas and the PA leadership denouncing the US-brokered agreement.

“Any normalization legitimizes the occupation of Palestinian territories,” Shtayyeh said. “It’s a stab in the back”.

Around 2,000 Palestinians took part in the rally at Turmus’ayya, a village in the north of the West Bank nestled between the cities of Ramallah and Nablus.

Israel and the United Arab Emirates have reached on August 13 a deal that is expected to lead to “full normalization of relations” between the Arab nation and Israel in an agreement that United States President Donald Trump reportedly helped broker.

The agreement is considered a severe blow to Palestinian efforts aimed at isolating Israel regionally and internationally until it ends its military occupation and apartheid-like system in occupied Palestine.