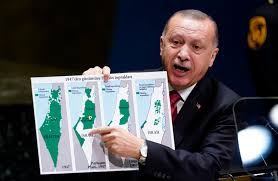 Palestinian President Mahmoud Abbas received on Saturday a phone call from his Turkish counterpart, Recep Tayyib Erdogan, during which the Turkish leader stressed his country’s firm support for the Palestinian cause and his rejection of any Israeli annexation steps or normalization of relations with Israel before ending the occupation and achieving Palestinian independence and statehood with East Jerusalem as its capital.

Erdogan expressed Turkey’s support for holding an urgent session for the foreign ministers of the Organization of Islamic Countries (OIC) to support the Palestinian position.

He also expressed Turkey’s readiness to offer assistance, including medical aid, to the State of Palestine in its efforts to contain the coronavirus pandemic.

President Abbas thanked his Turkish counterpart for his positions in support of the Palestinian cause, and congratulated him and the Turkish people on the discovery of the huge gas field in the Black Sea, expressing hope that this discovery would bring about prosperity for the people of Turkey.

The President also briefed Erdogan on the ongoing efforts to achieve Palestinian unity, including the recent meeting of the Palestinian leadership which was held in the presence of all the Palestinian factions and which stressed their united position against the Israeli annexation plans.