Israeli Authorities Order Palestinians to Stop Work on Their Land 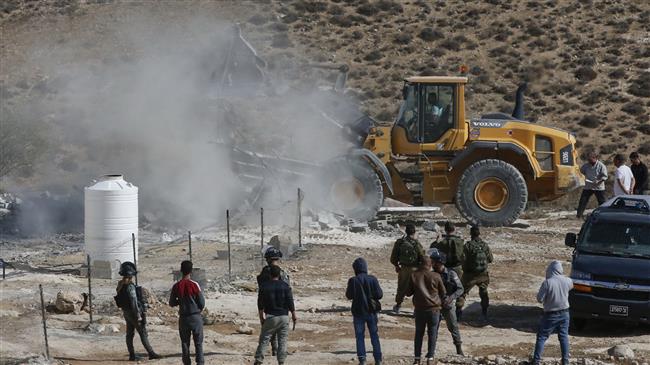 An Israeli bulldozer demolishes a Palestinian shack east of Yatta town in the southern West Bank district of al-Khalil (Hebron) on November 21, 2019. (Photo by AFP)

Israeli authorities ordered on Monday a number of Palestinian residents to stop work on their lands in the village of Birin in the southern West Bank district of Al Khalil, according to a local activist.

Wafa news agency quoted coordinator of the popular and national committees in southern Al Khalil, Rateb al-Jabour, as stating that Israeli forces stormed the village of Birin and handed five residents notices ordering them to stop work on their lands.

The activist said that Israeli authorities’ measures in the village aim at forcing residents to leave their land in order to seize it for the benefit of expanding nearby illegal Israeli settlements.

Earlier on the same day, Israeli settlers set up a new outpost in the village, which is usually a prelude to building a new illegal settlement.

Short Link : http://bit.ly/3hqz9tD
Tags
Next News
Thousands of Palestinian Homes in East Jerusalem are Under Threat of Israeli Demolition
Previous News
Despite Heavy Costs, Palestinians in Occupied East Jerusalem Decide not to Self-Demolish Their Homes
Most Views
Related Posts