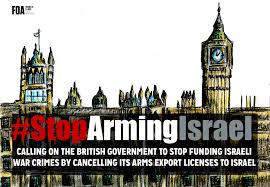 Dozens of pro-Palestine activists protested in London on Saturday outside the headquarters of Elbit Systems, Israel’s biggest private arms firm in the country, calling for its immediate closure, reported Wafa news agency.

Protesters gathered at the site from 1pm to highlight Britain’s “complicity in Israeli apartheid” through the government allowing Elbit to operate in the country.

The firm has 10 sites around the country including London, Oldham and Kent.

Speaking ahead of the protest activist Huda Ammori told the Morning Star: “The UK has been complicit in the colonization of Palestine for over 100 year… They are openly allowing Elbit Systems, who market their weapons as ‘battle-tested’ on Palestinian civilians, to operate here in the UK. This cannot and will not continue”.

“We need all people of conscience in the UK to take a stand in solidarity with the Palestinian people, to disrupt ‘business as usual’ and mobilize to shut Elbit down”, she added.

Elbit Systems supplies around 85 per cent of drones used by the Israeli occupation's military, which are used in daily surveillance and attacks on Gaza.