38 Years On, Palestinians Haunted by Horrific Memories of Sabra and Shatila 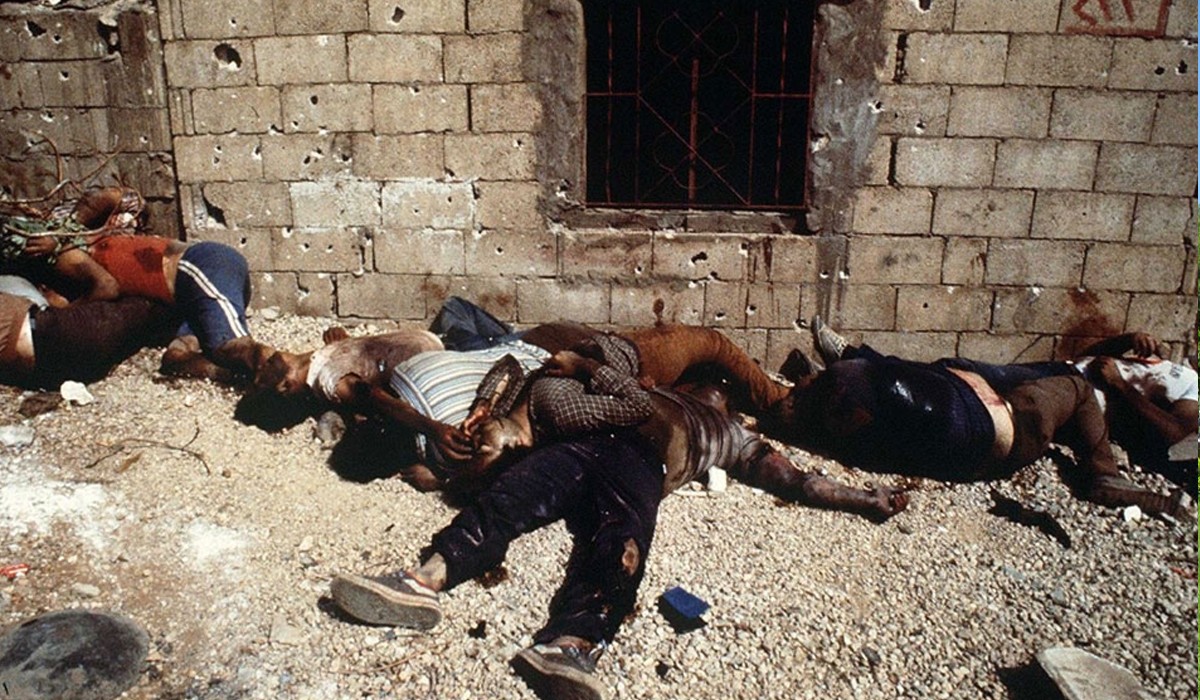 Up to 3,500 people were killed in the Sabra and Shatila massacre. (File photo via social media)

Palestinians on Thursday marked the anniversary of the horrific Sabra and Shatila massacre which took place in Beirut 38 years ago, reported The New Arab news site.

Remembering the Sabra and Shatila massacre, Abu Mohammed Al-Salhani, a 97-year-old Palestinian refugee told the Anadolu news agency, “Its horrors, its pain, and its atrocity cast a shadow on our souls. We will never forget because suffering is never forgotten.”

Al-Salhani lost his best friend, Abu Ahmed Al-Said, in the massacre and today remembers the time he spent with him.

“I used to stay with my friend Abu Ahmed. When I’d come back from my work I would go and visit him. He was the dearest person to me – he was a leader and an example for the whole camp.”

Al-Salhani told Anadolu that the Israel-allied militiamen knew exactly who they wanted to kill.

“The agents used to call people by their names, and when they answered, they would shoot them with guns equipped with silencers.

“They killed everyone who they found in this street,” he added, referring to the street where he lives, “They carried on with the massacre for three days night and day. People ran away from here. We can never forget this pain.”

After Israel besieged and ruthlessly bombed West Beirut in 1982, PLO fighters agreed to leave West Beirut under a deal brokered by the United States in August of that year. The Sabra and Shatila camps were left defenseless as a result.

Also in August, Bachir Gemayel, the head of the Kataeb Party, was elected President of Lebanon by the Lebanese parliament. However, on September 14 he was assassinated. Although his assassin was a Lebanese member of the Syrian Social Nationalist Party, the Kataeb militia blamed the Palestinians and used it as a pretext to carry out the horrific massacre in the undefended camp.

“They used to knock on someone’s door, tricking them by saying their neighbour’s name. Before they killed that person they used to ask him the name of his other neighbour. They then killed him and his family and move on to the next house and so on.”

Abu Bakr, who was only seven at the time, managed to escape the camps with his parents, siblings, and grandfather, seeking shelter in a school nearby.

Another Palestinian refugee, who chose to remain anonymous, gave a horrific account of one of the atrocities committed.

“There was a man called Abu Mohammed Al-Dokhi, who used to own a small shop selling fuel. They would take out the fuel oil in syringes and inject it into his leg. It was absolutely terrifying.

The anonymous refugee, however, added that most Palestinians played no role in the Lebanese civil war.

“There are people with a grudge against the Palestinian people even though we had nothing to do with this. We were forced to come to Lebanon and we’d go back to Palestine tomorrow if we’re allowed to go back. We didn’t come here to occupy Lebanon.”

He said, however, that he would always remember the 1982 massacre.

“We cannot forget this massacre. So many women and children died, they had no mercy on anyone.”

In 1983 the Israeli Knesset’s Kahan Commission of Inquiry into the massacre found Ariel Sharon, who was then the Defence Minister of Israel, personally responsible for the massacre and he was forced to resign. However, in 2001 he became Prime Minister of Israel, remaining in office for five years and overseeing the suppression of the second Palestinian Intifada. He died in 2014.