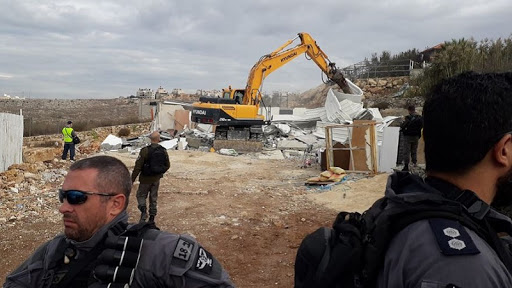 Israeli occupation forces demolished on Thursday a number of shacks belonging to a Palestinian farmer near the village of Tarquimia, to the west of AlKhalil City in the occupied West Bank, according to WAFA new agency.

An occupation army force raided a ranch belonging to Mohammad Abdel-Aziz Qaquor, where they demolished a number of shacks used for farming purposes. The raiding force also shut down a number of dirt roads serving the local Palestinian farmers in the area.

In the meantime, the Israeli occupation army ordered a Palestinian citizen of the village of Taqu, near Bethlehem, to stop the ongoing construction of his home in the village, under the pretext of lacking an Israeli construction permit.

Faisal Mohammad Omour said the occupation army also confiscated a concrete mixer which was used by workers at the construction site. He said he was threatened by the soldiers not to resume the construction works or that he would be prosecuted by the Israeli authorities.