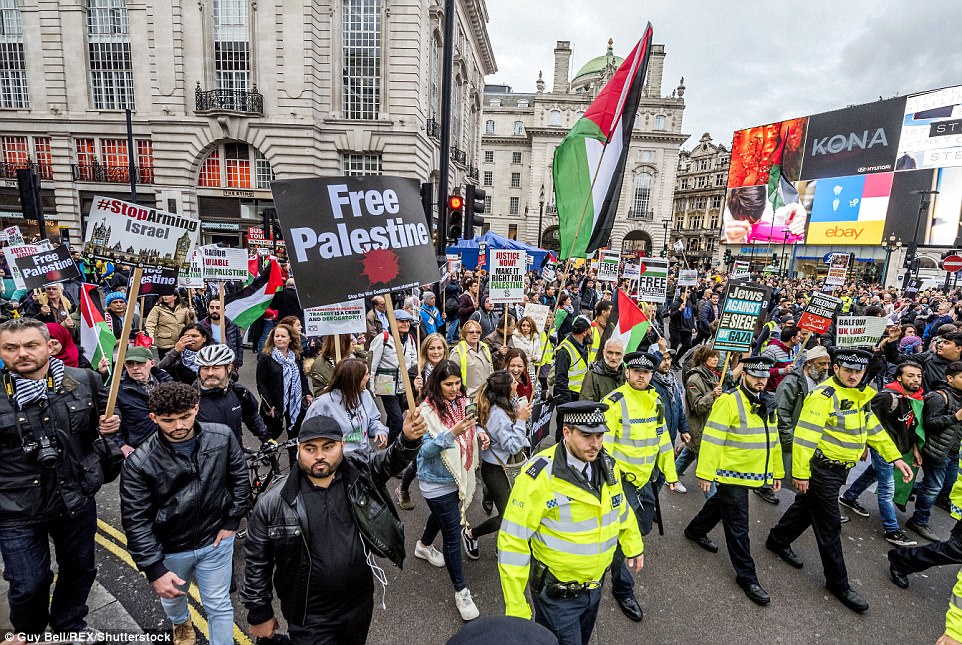 Thousands of pro-Palestinians demonstrators took to the streets of London to protest against the 100 year anniversary of the Balfour Declaration which led to the creation of Israel. Nov 2017. (File photo via social media)

Britain’s Trade Union Congress (TUC) has passed a motion identifying Israel as a state practicing apartheid and called for the continued support of the Palestinian people.

The TUC, an organisation made up of UK trade unions, voted on Tuesday at its annual conference in Brighton, in favour of a motion put forward by Unite the Union which opposes the current Israeli government’s plans to annex up to 30 per cent of the West Bank.

The motion identifies annexation as “another significant step in the creation of a system of apartheid” and has been welcomed by representatives of Palestinian civil society.

The motion came a week after a statement was released by over 20 charities, trade unions, religious groups, and civil society organisations urgently calling on public bodies to “uphold their ethical and legal responsibilities to ensure human rights and international law are respected” as a direct response to Israel’s illegal annexation plans.

“Congress stands united in its full opposition to the Israeli government’s declared intention to annex great swathes of the West Bank,” said the TUC motion describing the move as “illegal under international law” which “makes clear there is no intent on the part of the Israeli government to end the occupation and recognise the Palestinian people’s right to self-determination.”

Such a move, said the TUC, “will be another significant step in the creation of a system of apartheid”.

“For too long the international community has stood idly by as the Israeli state has been allowed to carry out its crimes and this cannot be tolerated or accepted any longer,” the motion went on to say. “Decisive action is now urgently needed in relation to Israel’s illegal actions against the Palestinians.”

TUC congress urged to “fully support and play an active role in the Palestine Solidarity Campaign’s actions to build a broad coalition against the proposed Israeli annexation and to urge all affiliates to do likewise.”

A letter will be sent to the British prime minister “demanding that the UK take firm and decisive measures, including sanctions, to ensure that Israel stops or reverses the illegal annexation, ends the occupation of the West Bank and blockade of Gaza, and respects the right of Palestinian refugees to return.”

TUC also pledged to undertake initiatives in order to “communicate its position to all other national trade union centres in the International and European Trade Union Confederations and urge them to join the international campaign to stop annexation and end apartheid.”

Following the adoption of the motion, Director of the Palestine Solidarity Campaign, Ben Jamal, said: “We welcome this motion which reaffirms the strong support across the UK trade union movement for the rights of Palestinians”.

“By rightfully identifying that Israel is practicing a system of apartheid, the consequences become clear: There can be no normalised relations with any state practicing apartheid unless one is to become a reinforcing part of the system. We applaud the TUC for calling clearly for sanctions”, he added.