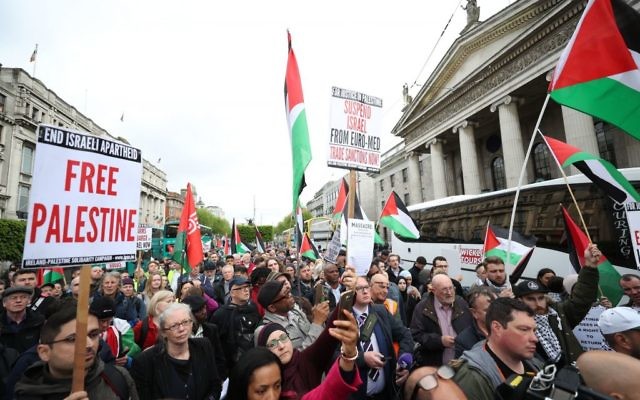 Palestinian human rights organisation, al-Haq, sent a letter to the Prime Minister of Ireland urging authorities to recognise Palestine and support an Irish proposed bill that would ban trade with illegal settlements.

In 2018, Ireland proposed the Occupied Territories Bill which aims to ban and criminalise "trade with and economic support for illegal settlements in territories deemed occupied under international law", most notably Israeli settlements. Violators would face fines of up to €250,000 and up to five years in prison.

The Ramallah-based group responded to PM Micheál Martin's suggestions, noting the Occupied Territories Bill is not in compliance with Ireland’s obligations under European Union law.

Al-Haq said prohibition of the importation and sale of settlement produce would not only conform with EU law and policy, but would moreover bring Ireland into compliance with its Third State obligations.

The group also highlighted the conservative party's - Fianna Fail - 2020 election manifesto which made commitments to “progress the Occupied Territories Bill” and “continue to spearhead the campaign to seek the recognition of the state of Palestine by the Irish Government.”

The group said it was Fianna Fail which introduced the Bill, initially tabled by Senator Frances Black in Ireland’s upper house, to the parliament’s lower house.

Al-Haq also urged Ireland to formally recognise the State of Palestine, as was included in Fianna Fail’s manifesto and the Program for Government.

To achieve true justice for the illegal killing of Palestinians by Israel, such as Iyad Hallaq and Ahmad Erekat, recognition of the State of Palestine is vital on the international front, the group said.

The call for action comes amid growing outrage over increasing Arab-Israeli normalisation.

The UAE and Bahrain became the first Gulf states to formalise diplomatic relations with Israel after a signing ceremony in the White House on September 15.

More Arab states are expected to follow suit despite Palestinian opposition to the move.