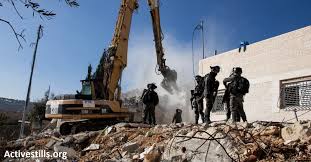 Israeli occupation forces on Thursday delivered a demolition order targeting a Palestinian house and took photos of three others in Main village in the south of the West Bank, pending their demolition, according to a local source.

Coordinator of the Popular Anti-Settlement Committees in the south of the West Bank, Rateb Jabour, was quoted by Wafa news agency as stating that Israeli occupation forces raided the village and handed Issa Hammad a demolition order against his house purportedly for being built without a license.

Meanwhile, the soldiers took photos of three other Palestinian houses in the village, whose owners have already received demolition orders in early 2020.