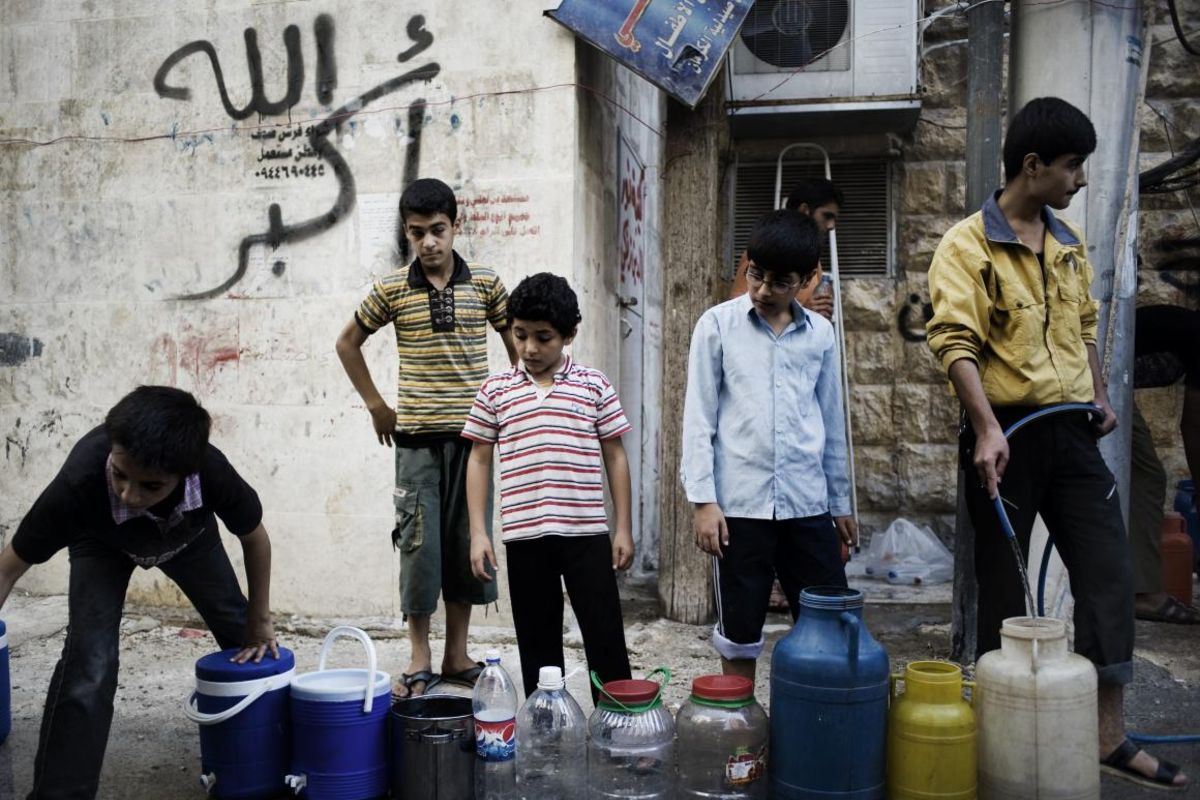 Gaza children struggling to get water

Suffering is deepening in Palestine as its economy continues to deteriorate and rising poverty levels exact a heavy toll, a recent report by a UN body found out.

According to a report by the United Nations Conference on Trade and Development (UNCTAD), in 2018 and early 2019, the Palestinian economy stagnated, per capital income further fell by 1.7%, unemployment increased, poverty deepened, and the environmental toll of occupation rose in the occupied Palestinian territory.

As figures in the report, about one in three Palestinians in the labor market is unemployed. In Gaza, the unemployment rate is above 50% while the poverty level has reached 53%, even though most of the people classified as poor receive aid from the government and international organizations.

Gaza is increasingly becoming unlivable under the severe and worsening socioeconomic conditions. In 2018, its local economy contracted by 7%, leading to a 10% decline in its per capita income.

According to the report, the reasons behind the near collapse of the Palestinian economy are the expansion and tightening grip of occupation, suffocation of Gaza’s local economy, a 6% drop in donor support between 2017 and 2018, deterioration of the security situation and lack of confidence as a result of bleak political horizons.

The viability and competitiveness of Palestinian producers are undermined by the multi-layered system of physical and administrative restrictions deployed by the occupying power.

In the West Bank alone, 705 permanent physical obstacles restrict the movement of Palestinian workers and goods. They include checkpoints, gates, earth mounds, roadblocks and trenches.

In addition, the economy is further weakened by the Israeli ban on the importation of a long list of “dual use” essential technological and intermediate goods as well as other critical production inputs (“dual use” goods are civilian ones deemed, by Israel, to have potential military applications).

The report noted that occupation isolates the Palestinian people from international markets and thus compels them into overwhelming trade and economic dependence on Israel, which accounts for 80% of Palestinian exports and supplies 58% of its imports.

With respect to the economic cost of occupation, the UNCTAD report suggested that occupation has prevented the Palestinian people from developing their oil and natural gas resources in Gaza and the West Bank.

In addition to the unprecedented deterioration in socioeconomic conditions, in July 2018, Israel passed a law mandating deduction, from Palestinian fiscal revenues, of an amount equivalent to the payments made by the Palestinian government to families of Palestinian martyrs and prisoners in Israeli jails.

Subsequently, in 2019, Israel deducted $11.5 million per month (equivalent to $138 million annually) from Palestinian clearance revenues. The Palestinian government responded by refusing to accept anything less than the full amount due to it in fiscal revenue.

This fiscal shock will further amplify the already large negative impact of declining donor support on output, employment and socioeconomic conditions. If this fiscal standoff persists, it may well push the economy into recession and instigate the collapse of Palestinian finances, the report further warned.

Despite several United Nations resolutions, construction of illegal Israeli settlements accelerated in the West Bank, and incidents of settlers’ violence in 2018 were the highest since 2014.

The violence coerces Palestinians to leave their homeland and relocate. Israel also uses the West Bank as a “sacrifice zone” to which it transfers hazardous waste produced inside Israel, thus threatening the health of the Palestinian people and the integrity of their environment and natural resources.

Meanwhile, in Gaza, the destruction and demolition of the sanitation infrastructure has resulted in environmental breakdown.

“The international community should do more to promote responsible and sustainable industrial practices in Palestine, and to protect the public health of the Palestinian people,” UNCTAD Secretary-General Mukhisa Kituyi said.