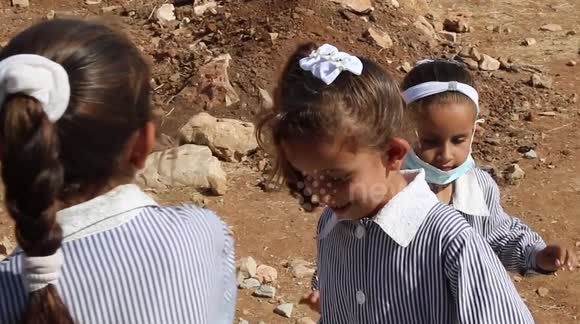 The European-funded Palestinian primary school in Ras At-Tin community serves 50 students who otherwise would have to walk around five kilometres to access the school in nearby Al-Mughayyer village. (Photo via: Newsflare)

The Norwegian Refugee Council (NRC) is deeply concerned by the Israeli military’s planned demolition of a European-funded Palestinian primary school in Ras At-Tin herding community in the central West Bank.

“These are some of the most vulnerable children, whose life is already extremely hard, and Israel as the occupying power has a duty to ensure that they get their education and basic services,” said NRC Regional Director Carsten Hansen. “Instead, it uses its power to do the opposite, denying them their fundamental right to education and paving the way for illegal settlement expansion.”

The school serves 50 students, from first to sixth grade, from Ras At-Tin community, east of the West Bank city of Ramallah, who otherwise would have to walk around five kilometres to access the school in nearby Al-Mughayyer village.

The European Union, several of its member states, and the United Kingdom provided humanitarian funding for the construction of the school. The Israeli military confiscated construction materials and tools on four occasions between 31 August and 10 September, including the school’s roof, desks, and chairs, under the pretext that the school lacked an Israeli-issued building permit. Israeli authorities deny as much as 98 per cent of Palestinian requests for building permits in Area C.

According to the Education Cluster, a forum that coordinates the humanitarian education response, Israel has partially or fully demolished three schools in the West Bank, including East Jerusalem, so far this year, and 52 other schools are under threat of demolition. In 2019, the Education Cluster recorded 328 education-related incidents, involving access restrictions, attacks on students and staff, and destruction of education infrastructure, affecting 19,913 students.

Since the start of this year, the UN reported that Israel demolished 555 structures in the West Bank, including East Jerusalem, forcibly displacing 747 people, including 382 children, and adversely affecting 2,722 others. The structures included 217 residential properties and 45 water, sanitation and hygiene facilities. Donor states had provided 93 of the destroyed or seized structures as humanitarian relief.