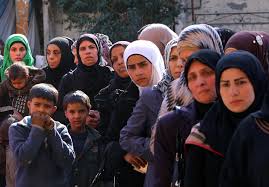 Ten years into the Syrian conflict, the Palestinian refugee community continues to be among the most affected groups in the war-torn country. Yet, hundreds of success stories have emerged from the heart of darkness.

On the International Day of the Girl, AGPS confirms that scores of Palestinian refugee girls in/from Syria have defied the war-inflicted trauma and left their own creative stamps.

The list includes Palestinian girls Jana Ali Yousef, from Harasta, and Israa Mohamed AlRefai, from Yarmouk Camp, who were honored by the Syrian Presidency after they got full marks (3100/3100) as part of their 9th grade exams.

Palestinian sisters Hana and Rana Ahmed Zaki Khayrat, from AlAyedeen refugee camp, in Hama, got the highest scores in Hama city. Their father died under torture in Syrian jails.

A number of displaced Palestinian students who have been taking shelter in poorly-equipped tents north of Syria have also achieved outstanding academic results.

Third year secondary school student Amal Issa, displaced from Yarmouk Camp, received a score of 1,160 out of 1,200 marks during the first semester of the 2019-20 academic year.

At the same time, Palestinian student from Syria Jala Khaled AlKhatib achieved outstanding results as part of the 2019 basic education exams held at Beit Jala private school, in Siblin, in AlKharroub region, south of Lebanon. She got the first rank at the school and the 24th in Lebanon.

15-year-old Jala was born and raised in Yarmouk Camp, south of Damascus. She headed for Lebanon with her family in 2013, fleeing war-torn Syria.

Al Nahda International School in Istanbul also honored the Palestinian girl from Syria Joudi Ahmad AlKurdi, displaced from Yarmouk Camp, in Damascus, for the outstanding results she has achieved as part of preparatory school exams (3rd grade) in Istanbul.

Palestinian student from Syria Ines Kilani achieved the highest score as part of Secondary school exams (scientific branch) at Jensen Gymnasium Sändra  School in the Swedish capital city—Stockholm. She got full marks in all of her school exams.

Palestinian refugee from Syria Rama Rashid Ziyad Taha has passed her 2nd year university examination with honors at Alberta University in Canada, where she has been studying biomedical science.

In 2018, Rama received a university scholarship after she earned a high score (98.9) in her baccalaureate exams in Dubai.